The Orchestra of St Luke’s opened its new season (the 33rd) with a typically rewarding, eclectic program, the full complement of 60-plus players capable of resoundingly potent sonorities, strutting their stuff with assurance. New York concert-goers had been disappointed by Claudio Abbado’s absence from the Lucerne Festival Orchestra concerts that opened Carnegie Hall’s season, but this audience responded enthusiastically to his nephew, Roberto.

The program opened with a sonorous, dramatic rendition of the Joan Tower’s In Memoriam, the string orchestra version of her String Quartet No.2. The work, written in 2002, is strongly tonal-centric, and could well have been written in the composer’s birth year, 1938, as it is in the same aesthetic orbit of string music by Hartmann, Bartók, Shostakovich and Copland. It was played with requisite gravity and focused intensity. 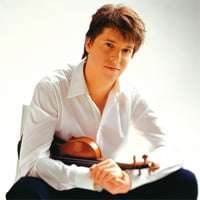 Joshua Bell featured in two works. The first was Barber’s shamelessly romantic Violin Concerto, whose warm and carefree lyricism is well suited to the deep sound of Bell’s ex-Huberman Stradivarius, and whose effortless musicality makes one forget that he is one of the most technically assured of violinists. The impassioned outbursts of the second movement and the unrelenting third, with its fiendishly intricate ensemble writing, were especially impressive. I have yet to hear a live performance of this work where there were not a few bumps in the ensemble; the St Luke’s players acquitted themselves especially well.

After the intermission, Bell gave the premiere of 16-year-old Jay Greenberg’s Violin Concerto, commissioned by the soloist. The work is far more substantial, impressive and outright entertaining than the works collected on a recent Sony issue (including his Fifth Symphony!). The single movement is laid out in a traditional ABA structure, and the emphasis in the outer a sections is both motivic development and engaging contrapuntal figurations between soloist and orchestra. The opening of the work and subdued but never static central section effectively displayed Greenberg’s penchant for colorful orchestration, including sparing use of effects. Greenberg’s orchestration style seems influenced by John Corigliano, but with surprising and original touches. The closing of the work recapitulates the opening musical gestures in a dramatic and highly satisfying soloist-orchestral bacchanal.

It’s not every day that a concert closes with a Haydn Symphony. Abbado brought plenty of charm to the first of Haydn’s ‘London’ Symphonies. There were touches of ‘authentic’ phrasing in the Adagio opening and in the Largo cantabile, but, for the most part, this was a ‘big band’ performance – the St Luke’s players let loose with the sort of grand symphonic sound that summoned the ghosts of Eugen Jochum and Thomas Beecham, Haydn’s ‘surprises’ brought off with startling, virtuosic execution.