Orchestra of the Age of Enlightenment
Richard Tognetti (violin & director) 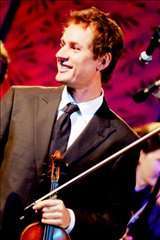 Richard Tognetti’s Australian Chamber Orchestra uses modern instruments, while the OAE uses ‘period’ ones with gut strings. So for this concert there was a certain meeting of minds between the violinist/director and the twenty other players – one that seemed pretty well harmonious.

Mozart’s Divertimento at once showed finely pointed, disciplined and characterful playing, tempos a little bit on the fast side, but exhilaratingly so. As a nod to a slightly later era of composition, Tognetti and some of the players used different bows for the single-movement Mendelssohn String Symphony. Again we heard some sparkling, vivacious musicianship, with an already speedy final section that revved up to a breathtaking rate.

Then to Haydn for his delightful first (authentic) Violin Concerto; what a pity that the great virtuosos of the past and present have rather neglected and the composer’s four extant concertos for violin. The C major example certainly gives the soloist plenty of scope for display, especially in the finale, taken here at a furious rate, and the quality of invention is high. Tognetti showed off his brilliant technique to some effect, but he was also sympathetic to Haydn’s characteristic open-hearted good humour.

For the second half of the concert we moved into the nineteenth-century. Here I was reminded of Pierre Monteux’s advice to Neville Marriner, after having attended a concert by the fledgling Academy of St Martin in the Fields, led by Marriner, that he should learn to conduct. One gathered that some pretty intense rehearsal had taken place so that Tognetti’s wishes in the matters of shaping phrasing could be absorbed. It is a tribute to the outstanding musicianship of the OAE players that ensemble was so good and that the playing seemed to be spontaneous.

Tognetti’s string-and-harp arrangement of the Grieg Lyric Piece, rather detracted from the piquant quality of the piano original, whose wistful quality was mostly lost. In Elgar’s exquisite musical sigh the harpist Tanya Houghton made a notably sensitive contribution, and then the string-players tackled Dvořák’s Serenade. This was perhaps the best and certainly the most affecting performance of the evening, for Tognetti was ultra-responsive to the gentle, heart-warming elements of this work. The opening Moderato wafted by delightfully, there was a lovely lilt to the ‘Tempo di valse’ movement and the finale was good-naturedly vivacious.

If you have a string ensemble and a harp available, the choice of encore is perhaps not too difficult. In introducing the Adagietto from Mahler’s Fifth Symphony Tognetti criticised the sometimes long-drawn-out renditions of this movement, and referred to Mahler’s own St Petersburg reading that lasted about seven minutes. Tognetti’s own came in at just over eight minutes, and sounded proportionate. Not only that, but the smaller body of strings and a more than usually prominent harp gave the piece a clearer, less cloying but at the same time more intimate quality than usual. It rounded off a very enjoyable evening of music-making.