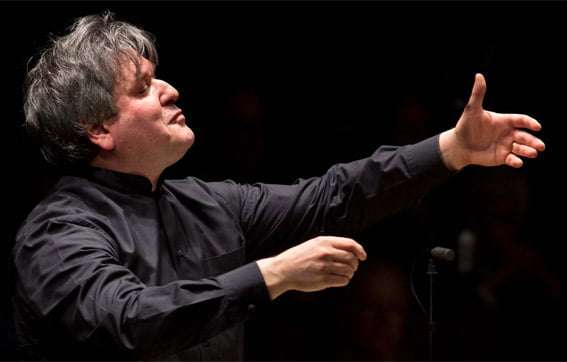 In one of their occasional translations from pit to stage, the Orchestra of the Royal Opera House and Antonio Pappano again presented a cleverly thought-through programme. It was also a pleasure to hear a concert played in a horse-shoe auditorium with a flattering acoustic. Pappano’s pithy introduction gave a succinct guide to the four works, although the darkness of the Richard Strauss and the Frank Martin wasn’t entirely dispelled by the more benign mood of the second half.

Strauss’s Metamorphosen is a lament for the destruction and betrayal of European culture in the Second World War, and with the way things currently are it stands equally tragically as an anthem to the failure of the European ideal. At least, that is how it sounded in a performance that expressed loss, delirium and ferocity with numbing facility. The Orchestra’s Concert Master, Vasko Vassilev, faded in and out of the solo passages as though he was trying to give a coherence to Strauss’s epic distillation of grief, all twenty-three strings played with a veiled reticence, and the eventual goal of Beethoven’s ‘Eroica’ Funeral March never sounded more like a door closing.

The Strauss connection continued tangentially with the cycle of Six Monologues from Jedermann by the Swiss composer Frank Martin, written around the same time as Metamorphosen. Jedermann (Everyman) is a morality play by Hugo von Hofmannsthal (who wrote six librettos for Strauss) about a fabulously rich merchant living in constant terror of death. The Six Monologues Martin extracted from the play move from the desperate Jedermann’s clinging to life, to his rapid disintegration and a Christian acceptance of the Grim Reaper. For those who prize his intimate and consummate artistry as a Lieder singer, Christian Gerhaher didn’t seem an ideal fit for the explicit drama of the music’s syllabic declamation, but was much more convincing in passages of Sprechgesang-style anxiety and in the hard-won serenity of the hushed closing pages. The fleeting, expressionist orchestral writing is more concerned with atmosphere than word-painting, and Pappano ensured a fine balance with the singer.

Unless you knew them already, you might well be surprised that the straightforward arrangements of Eight American and British Folksongs were the work of Shostakovich, and some of them – ‘Blow the wind southerly’, ‘Billy Boy’, ‘Coming through the rye’, ‘When Johnny comes marching home’ – are very familiar. Gerhaher’s English diction was clear and he gave a rough approximation of a Scottish burr in the setting of Robert Burns’s ‘John Anderson, my Jo’. The settings don’t enhance the Folksongs in the way Britten’s do, but Gerhaher’s readings were engagingly direct.

The full ROH Orchestra finally made its mark in Elgar’s Enigma Variations, with Pappano presiding over a hugely characterful and affectionate performance. There were a few moments of Elgarian swagger, but it was the extreme withdrawal of ‘Nimrod’ and the mystery of the asterisks of Variation XIII that got closest to the music’s spirit and invention.