This debut concert for Orchestra Platform Seven (named after the “imaginary, speculative and idealised space for the weary traveller” that is the ‘missing’ platform at London Bridge station) was an event for its musicians anyway, but the appearance of Ivry Gitlis, who, in his ninetieth year, proved an energised performer, added a frisson to proceedings. It will be a remarkable story for the musicians – all graduates from the Royal College of Music – to tell in the decades to come: that they played with Gitlis, who was himself taught by George Enescu (1881-1955). 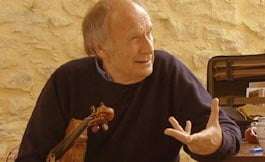 Gitlis offered Chausson’s wonderfully atmospheric Poème, which concerns the unrequited love of a musician for a beautiful girl, and, after a false start – Gitlis halted proceedings after his opening statement because he was missing the cushion for his violin: “a violin without a cushion, fine, but what’s a cushion without a violin?” he entertained as one was found – gave a free-spirited account. In fact, it was the orchestra that was Gitlis’s cushion: its playing haunting and mystical – superb – to his independent voice. Much-reduced forces were employed for the Adagio from J. S. Bach’s E major Violin Concerto, which Gitlis led. It was a thoughtful meditation from the orchestra, often beautifully sounded. Gitlis the fiddle player was on show, and whilst his instrument’s tone was not rounded, his flowing phrases and long experience were sufficient reward.

Encores were inevitable (and the funny stories were an unexpected pleasure), and three were duly dispatched, with Jacobson accompanying. A heartfelt account of Maria Theresia von Paradies’s Sicilienne preceded two by the “love of all violinists”, Fritz Kreisler: Schön Rosmarin found Gitlis full of joy, whilst he truly revelled in the dexterity needed for Syncopation. It would be remiss not to mention Gitlis’s instrument, which did not sound well, and there were other failings, but Gitlis is a player born out of a tradition of playing much freer than current audiences are used to; it was a welcome privilege to hear this legendary artist, who is a window on such practice.

Julian Jacobson opened the concert with Mozart’s C minor Fantasia, its beauty and volatility well-judged on this church’s expressive Fazioli instrument. His unforced playing seduced and the vigorous sections were propelled. Similarly K453 was a tonic. Some beguilingly elegant oboe contributions along with the clean sounds of the strings made this a pleasure to hear against Jacobson’s refined playing. The slow movement had an affecting stridency in places, and the finale, sprightly and flowing, unafraid of fleeting darkness, revealed both grandeur and humour, with deft touches from the soloist.