Rimsky-Korsakov/Ravel
Antar – Symphonic Suite, Op.9 [first revised version, 1875, then as Symphony No.2, arranged and added to by Ravel, with a new narration by Amin Maalouf; US premiere]
Guillaume Connesson
Celephaïs [US premiere]
Ravel
Shéhérazade
Daphnis et Chloé – Suite No.2 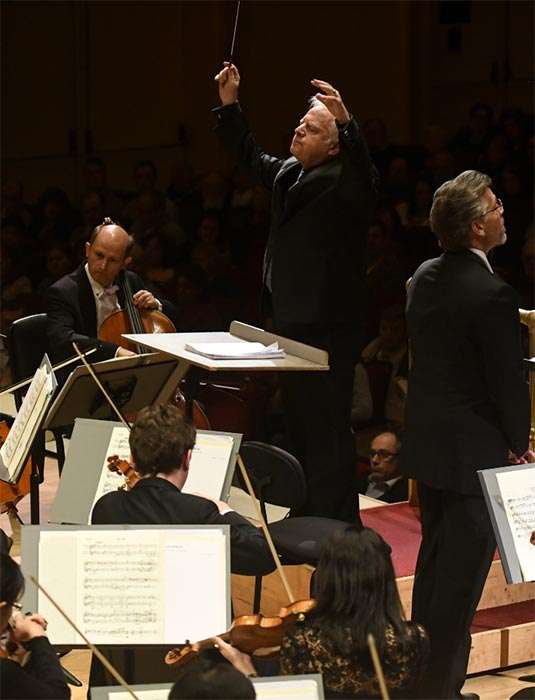 The concert opened with the US debut of a reconstructed version of Ravel’s arrangement of Rimsky-Korsakov’s Antar. Premiered recently in Lyon with a French-language narration by Amin Maalouf, the hybrid work was performed on this occasion in an English translation by Matthew Hurt and Sarah Vermande. The highly poetic text is based on a sixth-century Romeo and Juliet-type story well-known in the Arab world. The libretto, spoken during and between musical movements, was movingly recited by Thomas Hampson. Ravel’s exotic score, which consists of arrangements he created for most of Rimsky-Korsakov’s Antar and for fragments of other Rimsky works – most notably Scheherazade – is by turns rapturous, militaristic, radiant, and furious, and always engaging. Slatkin, conducting swiftly and astutely, drew a resplendent, multicolored performance from the ONL musicians.

After intermission was the US premiere of Celephaïs, a symphonic poem by Guillaume Connesson, the ONL’s Associate Composer, a title he shares with John Adams. The story is based on an exotic tale by the American fantasy writer H. P. Lovecraft. Organized as a voyage to the imaginary city of Celephaïs, the piece is laid out in five sections, each depicting one of the city’s colorful and mysterious landmarks: the bronze gates, the onyx streets, the turquoise temple, the rose-crystal palace, and the processions of orchid-wreathed priests. In the ONL Slatkin had a magnificent instrument to elucidate Connesson’s luxurious and picturesque orchestration, highly influenced by Ravel and Debussy. Tempos expanded and contracted naturally, and the balance of color and shadows was ideal. 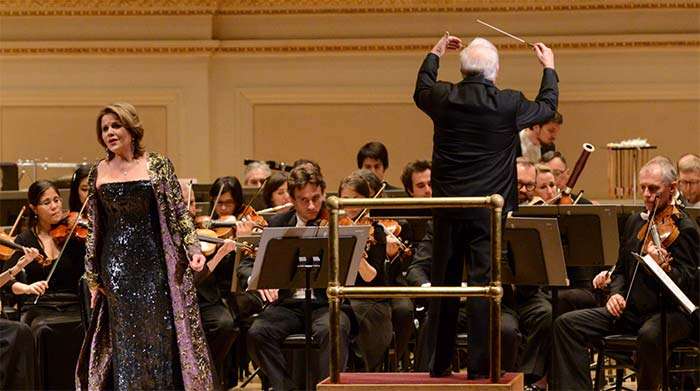 Following the two premieres, Renée Fleming brought her plush soprano, seamless phrasing and emotional commitment to Ravel’s timeless song-cycle Shéhérazade. While her voice displayed remarkable definition and affect, it was somewhat lacking in the desired volume and intensity. In places where one expected her to soar above the orchestra, such as the passionate climax of the first song, ‘Asie’, she more-often tended to blend into the texture. She brought an aching sense of yearning to the final song, ‘L’indifférent’, but was most effective in the intimate second, ‘La Flûte enchantée’, which featured some gracefully refined playing from the ONL’s principal of the named instrument.

The program concluded with one of the ONL’s specialties, Ravel’s Daphnis et Chloé. Brilliantly played, with sublimely expansive strings in the ‘Lever de jour’, luminous woodwinds in the ‘Pantomîme’, and a brilliant climax in the ‘Danse générale’, the performance was the highlight of a splendid evening of music-making.

There were two encores, the ‘Barcarolle’ from Offenbach’s The Tales of Hoffmann, and Carmen’s Hoedown composed by Felix Slatkin, the conductor’s father; familiar tunes from Bizet’s opera if not quite as we know them … I loved it, and you can hear this fun piece for yourself, below.