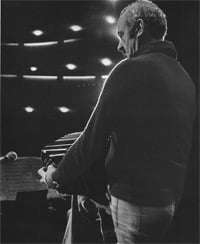 For many, it’s thanks to Astor Piazzolla that they’ve come to tango, and it’s curious to think that is, in turn, partly due to Nadia Boulanger. For it was she who encouraged Piazzolla to embrace the music he played with his band in nightclubs and to make it his life.

The Spanish name for a tango band is orquesta tipica and, typically, it consists of six players. Piazzolla’s band was Octeto Buenos Aires. Orquesta Tipica Imperial – also from Buenos Aires – added one to Piazzolla’s band of eight when its members took to the stage at the Snape Maltings leg of its current European tour. And, if tango seems atypical Snape, it only goes to show just how bold the programming of these August Proms is, with OTI preceded by the Britten-Pears Orchestra and the Choir of King’s College Cambridge following.

The nine – pianist, bassist, cellist, three violinists and three bandaneonists – shambled on, looking somewhat overawed by the venue, but launching without ado into a sequence of tangos. These were unannounced and unidentified but in characteristic tango mould, were noble, mournful, yet imbued with a smouldering passion. The three bandaneon players – Piazzolla’s instrument – were immediately compelling. All were seated, balancing their instruments on their knees, fanning out its concertina-pleats with elaborate gestures which mirrored the phrasing, From the lead bandaneon player – the long-locked and black-bearded Pablo Bernaba – there was a good deal of head and hair-tossing, mostly drawing attention to the rhythmic drama or to climactic points of the most virtuoso passages – of which he took the lion’s share – but with an element, too, of sheer macho display. 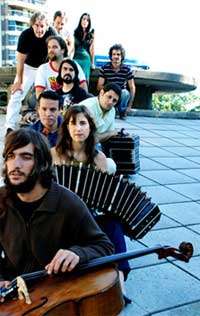 The technique and demeanour of the female player, Matilde Vitullo, was altogether different: no hair-tossing, but feet and legs moving in the manner of an animated rag-doll while still balancing the snaking bandaneon. The third player, Nicolas Fontana, was quite undemonstrative by comparison, though it was he who in due course endeared himself to the audience in faltering and idiosyncratic English.

The violinists, miked-up, produced a resinous and earthy sound, with principal Federico Morgan – playing left-handed – delivering strongly characterised solos to vie with those of the flamboyant bandaneonista. Rather surprising was the absence of a percussionist of any kind but, periodically, the players tapped out rhythms on their instruments, with the cellist in particular getting a thumping great sound not that far removed from a bass drum, and all the string-players using their bows to percussive effect.

While the first half’s arrangements and interpretations of more traditional tangos invariably deep, dark, anguished and lacking nothing in emotional power, it was in the second half that the Imperial band showed its truer colours, through the members’ own compositions. These were mainly tangos – nuevo, even supernuevo – though ironically it was the two non-tango dances, with more wildly fluctuating pulse, that were most vibrant. It was again unfortunate that all these numbers were unannounced and unattributed, though many appeared to have come from the hand of Imperial’s gutsy pianist, Gerardo Martinez Argibay, de facto director – and webmaster!

His pieces were harmonically more adventurous and outrageous, occasionally more jazzy, and structurally more experimental than anything else in the evening. As a result, they made for the most challenging listening. Was it Argibay’s idea too that OTI adopt trademark cadences, with a sudden fade on the very last chord, with an almost Beethovenian sforzato to pianissimo effect?

This performance had almost everything, but not quite … perhaps it was the absence of any improvisation and the special atmosphere that only a smoky Argentinean bar can conjure. The Snape audience was a bit too buttoned-up to dance in the aisles, to the evident disappointment of the band, but by the end they were warmly appreciative and one can only guess at the tango-dancing and hair-tossing the Imperial may have in fact have inspired.