Orton
A musical based on the lives of Joe Orton and Kenneth Halliwell, with music & lyrics by Richard Silver, book & lyrics by Sean J. Hume 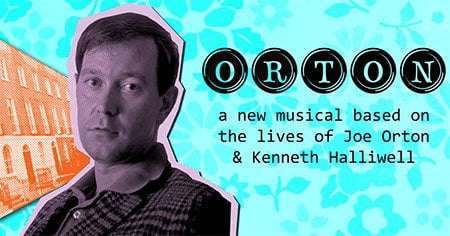 The fact that a musical primarily about the much-discussed love-affair between playwright Joe Orton and writer Kenneth Halliwell is titled Orton is ironic, for one of the things that tortured Halliwell is that he found being in the shadow of his celebrated ‘room-mate’ unbearable. Many show-business relationships suffer from unequal amounts of fame. Orton and Halliwell were lovers in the 1960s, when an open relationship could mean imprisonment – homosexuality was de-criminalised only a few days after Halliwell bashed in Orton’s head with a hammer and then killed himself. It is brave of Sean J. Hume and Richard Silver to dramatise this story as a musical, for controversy surrounded the association – did Halliwell write anything that was credited to Orton, or was his contribution merely to inspire and encourage?

Some would consider him lucky to have such a long relationship with a handsome young man, but it appears that Halliwell was constantly plagued by insecurity and low self-esteem. The show takes us from their first meeting in 1951 as students at RADA – aged 18 Joe was seven years younger than Halliwell, but just one month after they met, he moved into Halliwell’s flat. Andrew Rowney gives a fine performance as Halliwell, whose books are constantly met with rejection. According to those who knew the pair, they were blissfully happy, but it is hard to feel sympathy for the petulant Halliwell constantly in need of reassurance that Orton really cares for him. Orton is constantly seeking sex through casual encounters, his hearty and carefree appetite beautifully conveyed by Richard Dawes in a performance full of confident swagger and joie de vivre. When Halliwell shows him his latest collage for an exhibition, Orton responds, “You have your collarges and I have my cottarges.” 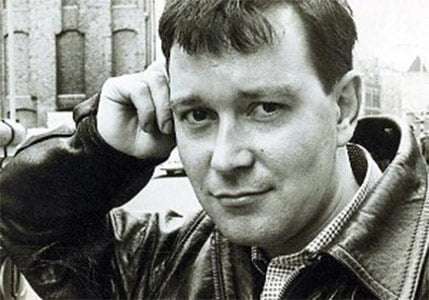 The show’s first half, exploring the relationship’s progress, is occasionally repetitious and could do with some pruning, but the second half is far superior, and at last offers some catchy tunes for numbers, not least ‘Form an orderly line’ the show-stopping number set in Morocco, where the couple holiday with their friend, Kenneth Williams. Simon Kingsley is superb as Williams, extremely funny and camp while staying just the right side of caricature. Orton’s literary career was managed by the high-powered Peggy Ramsay, played with elegant pizzazz by Valerie Cutkow, dismissing claims that she fancies Joe by stating that he “dances at the other end of the ballroom.”

The show’s grip strengthens as Orton finds success, first when Ramsay sells a play of his to the BBC, then he has an enormous hit with Entertaining Mr Sloane, which started off slowly at the Arts Theatre, but Ramsay cannily moved it to Wyndham’s. “It’s only round the corner”, Joe comments, but Ramsay points out, “It’s the West End!”. Sloane did not do well on Broadway, however.

The second Act brings more showcasing of the lively choreography of Phillip Aiden. The four dancers, who also effectively fill in some minor roles, are Katie Brennan, Danielle Irvine, Jordan Langford and Robert McNeilly. Director Tim McArthur has demonstrated before his brilliant knack for keeping things moving, however limited the space, and he makes skilful use of Andrew Holton’s attractive and adaptable set. This is the first musical to be given at the recently acquired Vauxhall venue, Above the Stag, and though trains are occasionally heard rumbling by, it will probably become an accepted part of the offbeat ambience rather like the similar sounds that permeate the Charing Cross Theatre, and the chorus of peacocks at Holland Park.