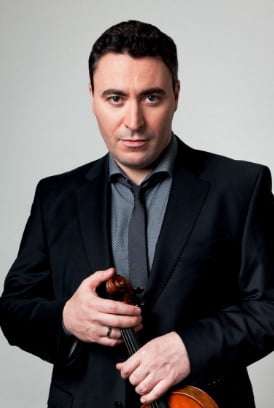 Writing this review I am reminded of one of my favourite music stories. The distinguished American composer and critic, Virgil Thomson, reviewed a concert conducted by Sir Thomas Beecham with a less-well-known east-coast orchestra playing the ‘Eroica’ Symphony and declared it the best he had ever heard.

The Oxford Philharmonic and its founder Marios Papadopoulos made an infrequent visit to London and gave a concert of such vigour and splendour that I was quite blown away. Mind you, honours were shared with Maxim Vengerov who played Sibelius and then conducted Tchaikovsky.

This was an unusual rendition of the Violin Concerto, a very rare outing (due to the requirement to seek permission from Sibelius’s estate for any performance of it) of the original version from 1904. This was a work where the violinist in Sibelius (he coveted being a virtuoso) came to the fore, pouring every trick into a fiendishly difficult work. The poor soloist tasked with giving birth to a work of such difficulty could not cope and Sibelius was distraught enough to withdraw his precious creation until a new request came from the Berlin Philharmonic, and no less than Richard Strauss to conduct, for a fresh attempt at the summit with a new violinist.

Sibelius took the opportunity to revise the work into the familiar version we know today. Maxim Vengerov played the first score, and what a shock we get when the longer form of the first movement turns out so differently, including a cadenza based on Bach, for which Vengerov offered his wonderful virtuosity. But he had to work extremely hard to meet the almost impossible challenges set down by Sibelius, and he rose to the occasion in splendid fashion.

The slow movement is the least changed but the little flourish at the end of it was excised at this performance! It was taken so slowly; too slow for the line of the melody and which did not allow contrast between the gorgeous tune at the beginning and the passionate counter theme in the middle. I recall Beethoven’s Concerto from Vengerov (also Barbican) and was reminded how disappointed I was at the funereal pace there, and now in Sibelius. So to the Finale with its crazy “polonaise for polar bears” (Tovey), retained by the composer but interweaved with side-tracking. Some of the deleted material can be regretted, but not everything.

All this must have taken some getting used to by the orchestra but there was no sign of unfamiliarity and Papadopoulos gave a convincing interpretation of a score that can bewilder the listener with its many twists and turns. It was played with great conviction.

Following the interval, Vengerov returned to conduct the ‘Pathétique’. A study of the orchestra’s personnel revealed many familiar names, not least that of the leader, Carmine Lauri, from the LSO.

The opening bassoon solo gave great hope for the rest of the performance, which was played with virtuosity, passion and great feeling. It sounded authentically Russian and the opening gloom was erased by the ethereal beauty of the main theme before the explosion leading to the frightening (here very frightening!) development, surging forward on the brass to the manner born. Vengerov gave a strange impersonation of beating the 5/4 melody of the second movement but all went well with his seasoned practitioners. The succeeding movement was not rushed, as it is so often. Rather the detail, so immaculately written by the composer, allowed for the cumulative power of this monstrous march to gain momentum by the end rather than halfway through, which is a trap many conductors fall into … and Vengerov immediately applied a dose of sombre sounds that herald the great, slow Finale, given with refinement and also an immense feeling for catastrophe. The close, on cellos and double basses, gnawed away at our nerve-ends leading to a sustained silence well observed by the audience. Vengerov may well be following in Mravinsky’s Leningrad footsteps.