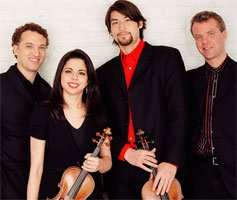 Shostakovich’s fifteen string quartets are fast becoming the most popular cycle in this genre written in the twentieth century, not least in recorded terms with more are to come including one by the Pacifica Quartet for Cedille. Pacifica Quartet, no stranger to Elliott Carter’s output, has a new association with the Metropolitan Museum of Art, as quartet in residence, a highly sought after appointment. This recital was the second of four to cover Shostakovich’s fifteen string quartets. What is especially engaging about Pacifica Quartet’s reading of these quartets is the intimacy of personal expression they project, whether in music of the most serene stillness (evoked with transcendent beauty by Simin Ganatra) or of gritty intensity and driving force (played with riveting vigor). Not intent upon producing a big splashy sound, wrapped in polished veneer, which would ill-serve this music, Pacifica searches the depths of this music to uncover its underlying spirit, one that can smile bemusedly through its sorrow with occasional sighs as well as rant angrily at life’s bitter torments. Russian folk music that plays such an important part in these works is treated simply and directly, without excessive stylization that would make it sound forced or disingenuous.

Treated in chronological sequence, the program began with the Fourth Quartet. Written in 1949 but not premiered until after Stalin’s death, it differs markedly from its predecessor; being neither tragic nor heroic, but simple and direct. The folk-like melodies of the first movement vaguely suggest collective grief trying desperately to restrain itself but becoming moody as the movement progresses. Deep ‘sighs’ imbue the following Andantino with a sense of private suffering that breaks out helplessly succumbing to some profound loss. Hushed, prayer-like violin solos seemed benumbed by a sense of underlying hopelessness. A muted sense of menace and anxiety beclouds the third movement, subtle and imaginative colorations, rich in melodic invention, and warm-hearted, yet tinged with subtle gray hues. Pacifica gave a straightforward reading that lends a sense of modesty perfectly in tune with the essence of this music. During the romantic elegy that is Allegretto finale, the heart of the work, an unaffected brusqueness characterizes the peasant dance music, giving it a folk-like simplicity despite its heavy-footed ill-grace. Internalized suffering becomes a communal experience through the personal expression of the folk music of Eastern European Jews. The defenselessness of the Jews became symbolic of the plight of the Russian people that Shostakovich sought to convey with such simple and direct means of expression, so well conveyed by the Pacifica.

In 1952, a few years after the devastating attack on Shostakovich and others by Zhdanov, the Soviet Union’s self-proclaimed cultural ideologue, Shostakovich responded in the only way he could, by writing his another string quartet, his fifth. It shares many concepts with his Tenth Symphony, which he wrote at about the same time. A five-note motif recurs in all three movements. The Fifth is one of Shostakovich’s toughest and most uncompromising string quartets. This characteristic is particularly evident in the first movement, a truly symphonic allegro that requires full-blooded sound permeated with driving rhythms that seem to propel the music to its own doom, only to be relieved by a moment of serenity tinged by tapping sounds that warn of dangers lurking ahead. The Pacifica elicited plenty of willful energy and brutal intensity. The Andante opens with a long contemplative introduction that sets up the finale’s central motif, which becomes less distinct as the music settles into the major mode. Shostakovich quotes from the Piano Trio by Galina Ustvolskaya, his student at the time. A sustained chord leads to the finale, a simple folk-tune played gracefully by the second violinist. Another Allegretto, quoting from earlier movements, follows with a confident waltz theme leads to the main section and becomes increasingly intense, driving furiously to a huge climax in which themes from preceding movements are juxtaposed. After the recapitulation, the slower tempo of the introduction returns leading to a quiet if not completely serene conclusion.

When Shostakovich came to write his Sixth String Quartet in 1956, he was fifty and seriously ill. The death of Stalin and the ensuing ‘thaw’ of the Khrushchev era, as well as the composer’s remarriage after his wife’s death, resulted in a work much different from the Fifth. On the surface, all seems light, fresh and untroubled. All four movements conclude with a perfect cadence. A simple, childlike opening which derives from a children’s song written in 1949 for the movie “The Fall of Berlin”, combine with a touch of pastoral gaiety seem to evoke a sense of renewed innocence. With the sole exception of a critical point in first movement that stirs the otherwise untroubled waters, the work maintains a genial mood throughout. Touchingly expressive, the Lento third movement is a gravely beautiful memorial to the dead, in passacaglia form that Shostakovich considered symbolic of grief and remembrance. Fashioned in cyclic form, the finale contains rhythmic and melodic elements that appear at the outset and throughout the movement, particularly the three-note motif of first main theme. The opening theme from the first movement hovers over the music without imbuing the sense of innocence it originally conveyed. At the climax of the development section’s intense scuffle, a ground bass from the passacaglia can be heard in canon between cello and viola. This impassioned music gives way to pastoral intimacy.

The Eighth is the most often performed of any of Shostakovich’s string quartets. Written in only three days in 1960 while visiting Dresden the work recalls the composer’s own experience during the siege of Leningrad. Shostakovich portrays the inhuman brutality and devastation of war in a fervid unrelenting Allegro molto. The five movements of the Eighth are played without a break; the second and third are both scherzos projecting different views, the third seeming at first like a trio for the second; the last like a condensed version of first. Quotes from his previous works as well as music by Wagner, Tchaikovsky and Beethoven (Opus 131) are identifiable. The fourth movement’s opening section was allegedly intended to depict gunfire and aircraft. Autobiographical elements appear through quotations from Shostakovich’s earlier works. Virtually the entire work is based upon a four-note motto derived from the German transliteration of the composer’s initials, using musical notation: D, S (E-flat), C, H (B natural), consisting of a rising and falling second. The motto is employed at different tempos. Three isolated and forceful strokes form an antagonist to the DSCH motto, interrupting the musical flow quite often as if prophesying doom. The fourth movement, based upon material from the first movement, begins with a moving violin duet that gives the impression of a prayer for the dead, transfixed by a vibrato-less first violin. The three-note strokes played by low strings function as a violent response to the degradation of the human spirit. A sardonic but humorous waltz appears in the fourth movement only once, leading out of the morass into a huge pedal-point supporting the enormous climax of the work. Gradually the music turns to despair only to fade away into “numbed but dignified silence. ” The Pacifica Quartet deeply identifies with this work, aptly evoking its grim determination in the face of virtual despair.