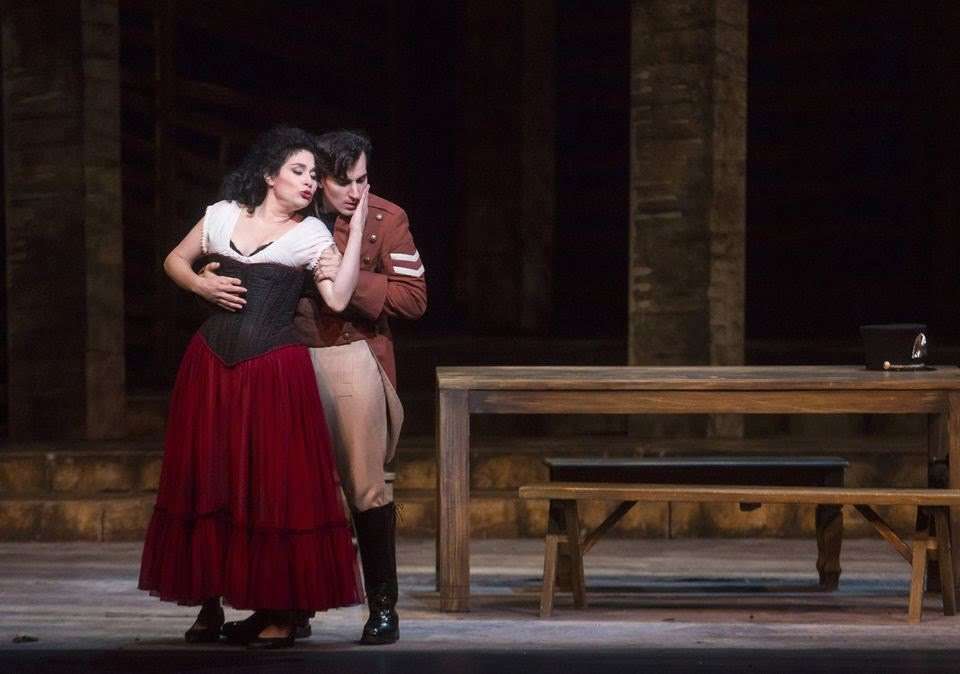 The success of any production of Bizet’s Carmen depends in large measure on the performer of the title role. In addition to excelling vocally, she must exude sex appeal (to seduce virtually every man she encounters) and an indomitable – if ultimately self-destructive – spirit. Rinat Shaham completely filled the bill in this most engaging staging to launch Palm Beach Opera’s new season. Shaham’s declaration of Carmen’s philosophy of love and life in the ‘Habañera’, and her seduction of Don José, were beautifully – and passionately – rendered. In Carmen’s final duet with him, she displayed fearlessness even as José murders her, bringing about the fate predicted by the fortune-telling cards.

As Carmen’s rival lovers, Leonardo Capalbo and Zachary Nelson brought appealing characterizations to their roles. Capalbo sang with a sweet tenor voice, the Act Two ‘Flower Song’ ardently expressive of José’s adoration for Carmen, and with his obsession for her coming through stunningly in the final scene. He was overpowered dramatically – but not vocally – by Shaham, but that is, after all, what the plot suggests. Nelson sang Escamillo’s ‘Toreador Song’ with a strong baritone and appropriate swagger, but didn’t offer a really convincing reason for Carmen’s preference of the bullfighter over José. 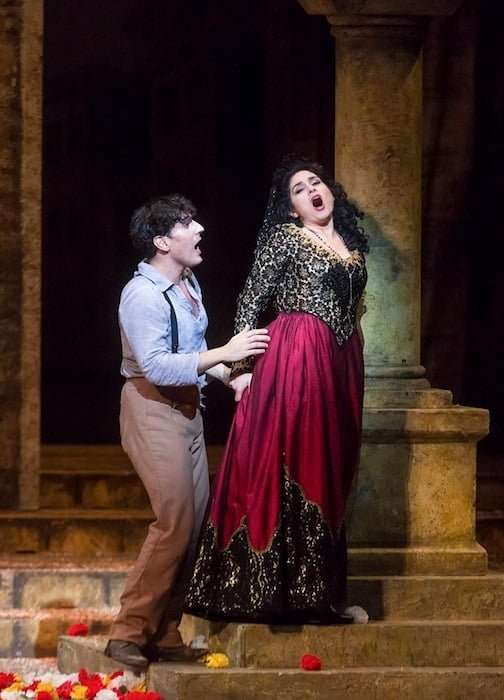 Eleni Calenos gave a vocally and dramatically touching portrayal of Micaëla, both in the Act One duet with José and in the Act Three aria when she traces him to the Smugglers’ hideout. Musa Ngqungwana sang and acted with self-assurance, appropriate to Don José’s superior, Zuniga, who also succumbs to Carmen’s magnetism. Tobias Greenhaigh was a fine Moralès, and the Smugglers’ Quintet in Act Three was among the highlights.

Paul Shortt’s attractive design featured towering arches and a long staircase leading to the cigarette factory, elements of which were rearranged to create Lillas Pastia’s tavern in Act Two and the exterior of the corrida in the final Act. But most spectacular was the beautiful mountainside retreat for the penultimate Act, Chad Jung’s atmospheric lighting and heavy snowfall emphasizing the harsh conditions faced by the Smugglers.

David Stern, new as Chief Conductor, led a spirited rendition; the Orchestra’s fine playing especially enjoyable in the entr’actes, the last of these accompanying a pair of flamenco dancers entertaining the crowd gathered outside the Plaza de Toros. John de los Santos’s direction was for the most part serviceable, but fight sequences were unconvincing, and his management of the Chorus tended to be somewhat stilted, entrances and exits at times lacking connection to the action.