Puccini
Turandot – Lyric drama in three Acts to a libretto by Giuseppe Adami & Renato Simoni after the play by Carlo Gozzi [final duet and scene completed by Franco Alfano; sung in Italian with English supertitles by Bruce Stasyna] 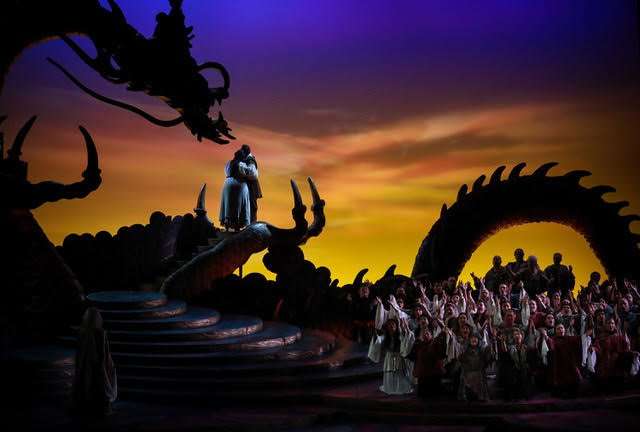 Palm Beach Opera opens its 2020 season with a musically outstanding and visually attractive production of Giacomo Puccini’s last opera, Turandot. A uniformly excellent cast, orchestra and chorus are in fine fettle in this fairy-tale story depicting the transformation of the eponymous Princess from icy bloodthirstiness to submission to the power of love. Chief Conductor David Stern brings out the score’s varied moods, contrasting the chaotic populace with the contemplative reminiscences of the trio of officials, Ping, Pang and Pong, and the pathos of the plight of Timur and Liù.

Soprano Alexandra Loutsion in the title role, and tenor Stefano La Colla as Calàf, the prince who seeks her hand in marriage, are the excellent antagonists at the center of the opera’s story. Loutsion gives a thrilling account of her difficult opening aria ‘In questa reggia’ (In this palace) in which Turandot explains her coldness toward men, followed by her three riddles that Calàf must solve or lose his head. But when, after he succeeds in this test, Turandot refuses to marry him, Calàf risks his life again, challenging the Princess to discover his name before dawn. His big moment, of course, comes at the start of Act Three as he anticipates victory in ‘Nessun dorma’ (Let no one sleep), which La Colla sings splendidly and passionately. In their final duet (completed after Puccini’s death by Franco Alfano), Calàf discloses his name to the still reluctant Turandot, trusting from her tearful response to his kiss that she would return his affection. She then declares to the assembled court that the Prince’s name is Love, bringing the opera to an end. 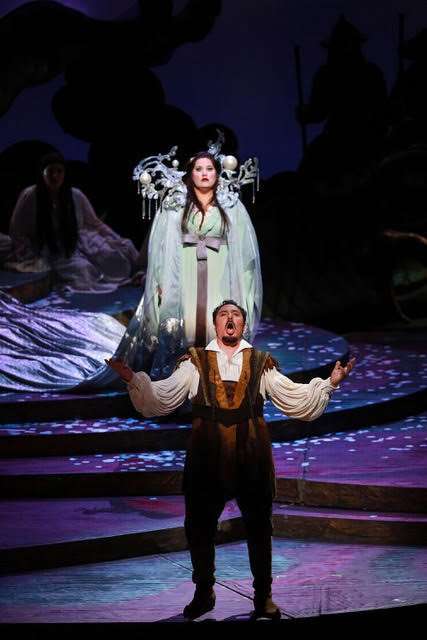 Evgeny Stavinsky’s deep bass resonates beautifully as he portrays Timur, the blind dethroned king and father of Calàf. Soprano Leah Crocetto is Timur’s slave Liù, tenderly revealing her secret love for Calàf in ‘Signore, ascolta’ (My lord, listen) as she begs him not to risk his life by accepting Turandot’s three-riddle challenge. Later, in Act Three, Crocetto won another ovation for her touching rendition of ‘Tanto amore’ (So much love), in which Liù declares that she would happily die to protect Calàf – and soon afterward does take her own life rather than reveal Calàf’s name. In the ensuing moments, instead of having Timur lead a procession bearing Liù’s body away, director Keturah Stickann has the dead girl rise and walk offstage along with Timur, as the distraught king sings her praises. The effect is jarring and momentarily disconcerting – until it becomes clear that it is Liù’s soul, not her body, that is being animated.

Baritone Zachary Nelson and tenors John McVeigh and Matthew Newlin, as Ping, Pang and Pong respectively, are also marvelous. These courtiers play an important role in the public ceremonials – attempting in Act One to dissuade Calàf from striking the gong that will commit him to challenging Turandot, then participating in Act Two’s riddle scene, and trying in Act Three to bribe Calàf to abandon his quest for Turandot’s hand. They are most engaging in the opening scene of Act Two, singing nostalgically of their peaceful country homes far from the gory goings on at court. There are also capable performances by Duke Kim as Emperor Altoum and Ilhoon Kim as the Mandarin, as well as dancers from Ballet Palm Beach and acrobats from The Gymnastics Revolution. 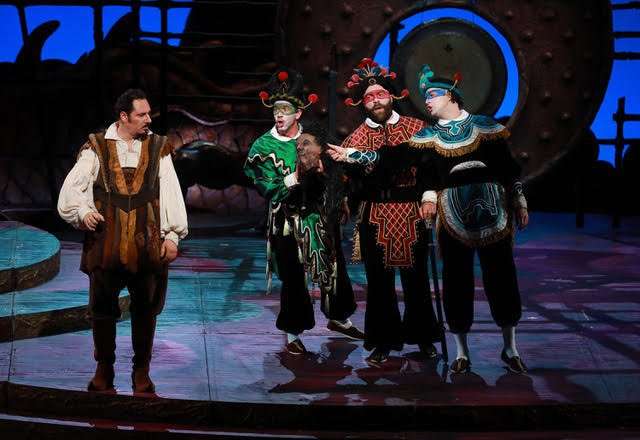 This handsome production was created by Bliss Hebert and Allen Charles Klein for a consortium of regional opera companies, and is now owned by the Lyric Opera of Chicago. The scenic design features a huge dragon that surrounds the stage, the beast’s head and talons on one side of the stage and its tail on the other, forming an arch within which the fateful gong is suspended. Additional framing elements are superimposed to define each locale: the square outside the palace; Emperor Altoum’s court, in which tiered platforms serve as a stairway; and the palace garden. Costumes are attractive, especially the colorful hats, masks and jackets of the three courtiers, although the ornate framing of Turandot’s head and shoulders is rather bizarre (but perhaps appropriately so).

Lucas Krech’s lighting design is spectacular. The stage is bathed in red at the moment of the execution of the Prince of Persia, and varying colors and intensity indicate the times of day, ending with a gorgeous dawn in the opera’s concluding moments. Narrow spotlights illuminate precise locations, such as picking out the Princess in the midst of a crowd and focusing attention on the gong that Calàf would soon strike.