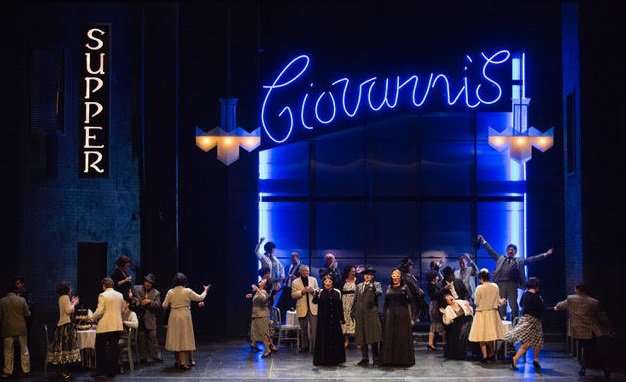 Kristine McIntyre has transformed Mozart’s Don Giovanni into a film noir, with staging that mimics scenes from famous exemplars of that genre. Costumes feature fedoras, trench-coats and mid-twentieth-century women’s fashion. Swords are replaced by revolvers, and the minuet by the lindy. The darkly lit cityscape’s only touch of color is the gaudy neon sign at Giovanni’s – the supper club run by the tuxedo-clad title character. Supertitles take liberties with the libretto to reflect the vernacular of the period, and a uniformly excellent cast carries the concept off brilliantly.

Palm Beach Opera’s Chorus and Orchestra are in top form, and David Stern skillfully leads a version of the opera that adheres for the most part to the original Prague score, omitting additions by Mozart for the Vienna production a year later (1788), ‘Dalla sua pace’ sorely missed given Bogdan Volkov’s fine rendition of ‘Il mio tesoro’, although Donna Elvira’s ‘Mi tradì’ is included and is a highlight.

Andrei Bondarenko and Joshua Bloom as respectively the Don and his servant make a memorable pair, jousting with each other as well as with the other characters. Leporello’s ‘Catalogue’ aria is terrifically staged and sung, Bloom’s huge, deep voice combining with superb comic timing as he hands one folder after another to the astonished Donna Elvira. Bondarenko exudes charm as the Don woos Zerlina in ‘Là ci darem la mano’, and is impressive in the rapid-paced ‘Champagne’ aria. The delicacy of his serenade ‘Deh vieni alla finestra’ shows off qualities that earned him the Song Prize at the Cardiff Singer of the World competition in 2011. 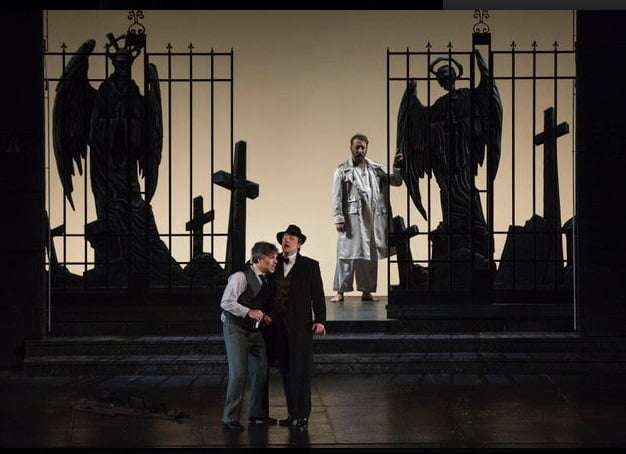 The characterizations of the three women whom the Don pursues are very different yet all are striking and evocative of actresses from the movies of the 1940s and 1950s. Caitlin Lynch is imposing vocally and dramatically as the vengeance-seeking Donna Anna, stoic as she defers marrying Don Ottavio until her father’s murderer can be brought to justice. Danielle Pastin is marvelous as the volatile Elvira, arriving already angry and continuing to express her rage and frustration at being repeatedly deceived, yet still harboring amorous feelings for Giovanni, while Danielle MacMillan brings out Zerlina’s ingenuous nature as a peasant girl who initially falls for the Don’s wiles but ultimately provides comfort for her much put-upon fiancé Masetto, sympathetically portrayed by Neil Nelson.

McIntyre has Giovanni dispatch the Commendatore with a revolver in the powerfully staged opening sequence, but his ghost silently haunts several later scenes, at one point sending his frightened murderer skittering across the stage. Mikhail Kolelishvili’s booming voice is suitably terrifying when the wraith’s statue arrives at the Don’s dinner table and challenges him to repent. In what is this adaptation’s most significant departure, the Commendatore does not drag Giovanni to Hell, but releases his icy grip and exits, leaving it to Leporello to shoot his boss. The end.