Skip to content
LnRiLWNvbnRhaW5lcltkYXRhLXRvb2xzZXQtYmxvY2tzLWNvbnRhaW5lcj0iNmIzNDMzNmNmZTc3NWZiNGJlMTVjMmIwMzU3NWM1MjYiXSB7IHBhZGRpbmc6IDI1cHg7Ym94LXNoYWRvdzogNXB4IDVweCAxMHB4IDAgcmdiYSggMCwgMCwgMCwgMC41ICk7Ym9yZGVyOiAycHggZG90dGVkIHJnYmEoIDEwOSwgMTA4LCAxMDgsIDEgKTsgfSAudGItZmllbGRbZGF0YS10b29sc2V0LWJsb2Nrcy1maWVsZD0iODM3Y2ExZjc0MGRjZDdkOTdlMzQzOWMyYjIwMWZmZTMiXSB7IGJhY2tncm91bmQtY29sb3I6IHJnYmEoIDIzOCwgMjM4LCAyMzgsIDEgKTtwYWRkaW5nLXRvcDogMTBweDtwYWRkaW5nLWJvdHRvbTogMTBweDtwYWRkaW5nLWxlZnQ6IDEwcHg7IH0g
LnRiLWNvbnRhaW5lcltkYXRhLXRvb2xzZXQtYmxvY2tzLWNvbnRhaW5lcj0iNmIzNDMzNmNmZTc3NWZiNGJlMTVjMmIwMzU3NWM1MjYiXSB7IHBhZGRpbmc6IDI1cHg7Ym94LXNoYWRvdzogNXB4IDVweCAxMHB4IDAgcmdiYSggMCwgMCwgMCwgMC41ICk7Ym9yZGVyOiAycHggZG90dGVkIHJnYmEoIDEwOSwgMTA4LCAxMDgsIDEgKTsgfSAudGItZmllbGRbZGF0YS10b29sc2V0LWJsb2Nrcy1maWVsZD0iODM3Y2ExZjc0MGRjZDdkOTdlMzQzOWMyYjIwMWZmZTMiXSB7IGJhY2tncm91bmQtY29sb3I6IHJnYmEoIDIzOCwgMjM4LCAyMzgsIDEgKTtwYWRkaW5nLXRvcDogMTBweDtwYWRkaW5nLWJvdHRvbTogMTBweDtwYWRkaW5nLWxlZnQ6IDEwcHg7IH0g
Ben Moore
Enemies, A Love Story – Opera in two Acts to a libretto by Nahma Sandrow, based on the novel by Isaac Bashevis Singer [world premiere; sung in English with English supertitles]
LnRiLWNvbnRhaW5lcltkYXRhLXRvb2xzZXQtYmxvY2tzLWNvbnRhaW5lcj0iNmIzNDMzNmNmZTc3NWZiNGJlMTVjMmIwMzU3NWM1MjYiXSB7IHBhZGRpbmc6IDI1cHg7Ym94LXNoYWRvdzogNXB4IDVweCAxMHB4IDAgcmdiYSggMCwgMCwgMCwgMC41ICk7Ym9yZGVyOiAycHggZG90dGVkIHJnYmEoIDEwOSwgMTA4LCAxMDgsIDEgKTsgfSAudGItZmllbGRbZGF0YS10b29sc2V0LWJsb2Nrcy1maWVsZD0iODM3Y2ExZjc0MGRjZDdkOTdlMzQzOWMyYjIwMWZmZTMiXSB7IGJhY2tncm91bmQtY29sb3I6IHJnYmEoIDIzOCwgMjM4LCAyMzgsIDEgKTtwYWRkaW5nLXRvcDogMTBweDtwYWRkaW5nLWJvdHRvbTogMTBweDtwYWRkaW5nLWxlZnQ6IDEwcHg7IH0g 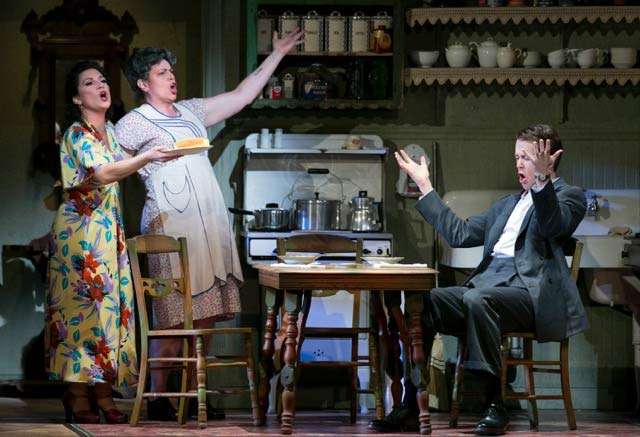 Love triangles abound in opera. Less common are plots in which a protagonist must deal with a triad of love interests. Yet this world premiere performance of Ben Moore’s Enemies, A Love Story was the third such opera I attended this week, each with a quite different resolution of its dramatic tensions. In Rossini’s La donna del lago, Elena, the eponymous Lady of the Lake, is pursued by two unwanted suitors, but she is ultimately united with her true love, Malcolm. In Mozart’s Don Giovanni, the wicked, insatiable and unrepentant title character abuses three women (among his many conquests) and ultimately is consigned to Hell for his misdeeds.

In Enemies, A Love Story, Jewish Holocaust survivor Herman Broder, the central character in the novel by Isaac Bashevis Singer, manages to acquire three wives, but proves incapable of coping with the attendant complications, with effects that are sometimes comedic and at others darkly tragic. Moore’s melodic score reflects these contrasting emotions as well as providing an atmospheric portrayal of Jewish life in New York City in the late 1940s. Nahma Sandrow’s effective libretto takes a few liberties with Singer’s tome that serve to simplify the plot and make its central themes easier to follow, as well as adding a few set-pieces that give Moore opportunities to introduce traditional klezmer motifs. 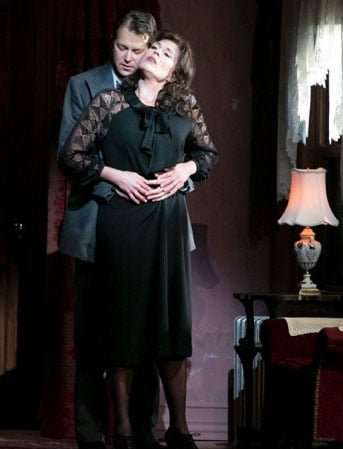 Broder, believing that his wife Tamara had been killed in their native Poland during World War Two, married Yadwiga, the Christian farm-girl who had hidden him from the Nazis in a hayloft for two years, bringing her with him to New York, where they live in an apartment in the Coney Island section of Brooklyn. Although she loves him intensely, his attachment to her is based more on gratitude than deep affection, so Herman seeks sexual gratification with Masha, who lives with her mother in The Bronx. He tells Yadwiga that his absences are out-of-town sales trips although he works as a ghost-writer for Rabbi Lampert. The pressures of lying to Yadwiga and the Rabbi were already taking a toll on Herman, but are compounded when he is confronted by the very-much-alive Tamara. He refuses her offer to divorce him, and then succumbs to Masha’s insistence that he marries her in a Jewish (but not civil) ceremony, and also yields to Yadwiga’s wish to conceive a baby. Herman’s attempts to conceal his polygamous life crumble. He leaves the pregnant Yadwiga in Tamara’s care, planning to move to Florida with Masha. When she returns from taking her dying mother to hospital and finds that Herman has abandoned her too, she takes a fatal overdose. The opera ends as Yadwiga and Tamara care for the newborn baby.

Allen Moyer’s realistic sets consist of the three apartments in which Broder’s wives live, each with atmospheric lighting. Yadwiga’s Coney Island dwelling is brightly lit, neat and clean, reflecting the peasant girl’s cheerfully optimistic personality; Masha and her mother’s Bronx home is rather dark and shabby, suggestive of poverty; and Tamara’s Manhattan residence where she lives with her uncle and aunt is comfortably furnished in old-world style with rich, red tones predominant.

Sam Helfrich has the rooms slide back and forth as the action moves from one locale to another, all three sharing the stage during the gorgeous trio for Herman’s wives at the opening of Act Two. These low-ceilinged boxes not only serve to emphasize the confined spaces in which the characters exist, but also are acoustically beneficial, helping to project the voices. Above the apartments, Greg Emetaz’s brilliantly conceived projections of photographs and video clips add a realistic flavor of the neighborhoods, as well as helping to illustrate the action from one locale to another. They also provide vivid reminders of the tragic events of World War Two that haunt the characters’ dreams and memories. Stylish costumes and hairstyles effectively reflect the period.

Moore has provided music for the wives that reflect their contrasting personalities. Yadwiga’s sunny persona is reflected in her opening aria, ‘Fly little bird’, and in the waltz-tune that she sings when she persuades Herman to start a family, music that is reprised as she admires her baby in the opera’s closing moments. Caitlin Lynch’s soprano rang out in upper registers, conveying Yadwiga’s cheery outlook, and she was also terrific in her shocked reaction to the return of Tamara, who she at first thinks to be a ghost. Masha’s music is passionate in her initial duet with Herman, joyous as she repeatedly extols the virtues of marriage (‘The voice of the bride’), hopeful as she plans for a new life, and finally tragic. Danielle Pastin gave an impassioned performance, particularly as Masha’s despair deepened. Tamara’s music, effectively illustrated by projections, is darker in tone as she remembers her children, who were killed in the Holocaust but, she says, they continue to visit her, and recounts to a march-tune the time she spent in Russia after escaping Poland. Leann Sandel-Pantaleo was superb as Tamara, her lyrical aria, ‘Close by the Moon’, being especially touching.

Daniel Okulitch was a beleaguered Herman, present through most of the opera as he struggles to keep his wives happy and his secrets from unraveling. His demeanor is initially cool toward Yadwiga, contrasting with his passionate duet with Masha and touching scene with Tamara, in which Moore’s music skillfully reflects the change of mood when, after they recall happier pre-war days in Poland, Tamara recoils from Herman’s touch and then jokes about the lies he has told to Masha. As his commitment to each of his wives deepens, he sings to each in turn a passage from the Book of Proverbs, ‘A woman of valor’. Okulitch was at his vocal best in Herman’s moving final aria, ‘If the scroll of life rolled backward to before’, representing his abject surrender.

Even though the dark shadow of the Holocaust looms over the principal characters, there are moments of levity, ably provided by Rabbi Lampert and Tamara’s relatives. This first-night audience reacted with loud laughter when the Rabbi tries to persuade Masha to move to Florida, “where you can pick oranges right off the trees”. In a more dramatic vein, those playing Masha’s mother and ex-husband gave capable performances, as did Liana Guberman and Rachel Arky as neighbors who warn Yadwiga to be suspicious of Herman’s absences.

Although this premiere presentation of Enemies, A Love Story has only a three-performance run, it is worthy of being staged again here and by other companies.