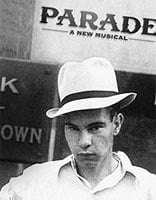 First I moan about the dearth of new musicals in London and then two come along in as many weeks. With “When Midnight Strikes” (at the Finborough Theatre until September 29) and now “Parade” at the Donmar Warehouse, things are definitely looking up. What with the staging of “Take Flight” at the Menier Chocolate Factory last month, it hasn’t been a bad summer for original musicals.

In fact “Parade” is not exactly new, but it is new to London. Originally staged in New York back in 1998 by its co-conceiver, the great Hal Prince, it had the full treatment flung at it, with elaborate sets and props and special effects, possibly to counteract the rather downbeat plot: it flopped.

However, nine years on it surfaces at the tiny Donmar Warehouse to much better effect. Why is it that this minuscule Covent Garden theatre can do almost anything better than anyone else? “Company”, “Assassins”, “Merrily We Roll Along”, “Into the Wood” and “Pacific Overtures” – all by Sondheim – have all succeeded resoundingly here. And the same goes for “Parade”. 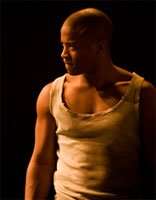 With music and lyrics by Jason Robert Brown, “Parade” is based on a true story about the murder of a teenage factory-girl in Atlanta, Georgia in 1913. Suspicion falls on Leo Frank, the factory boss who was the last person to see the girl alive, and also because he was Jewish and an outsider from Brooklyn. He is treated as they would have treated any Negro under suspicion at the time. Leo is jailed and heading for Death Row until his wife Lucille persuades the State governor to re-open the case. Leo’s sentence is commuted to life imprisonment – but that’s not the end of the story. Enter the Ku Klux Klan…

“Parade” is a really mature piece of music-theatre. It falls into two halves, with the first acting out all the lies that were paraded before the court. The trial is the finale to Act One. Part Two reveals the truth about what happened and the possibility of putting right the accusations against an innocent man. Jason Robert Brown’s extremely attractive score uses many styles in which to illustrate the state of mind and the inherent racism of the times through sentimental hymn-tunes, brash Southern dance-music, black work-songs and sorrowful ballads.

It seems to be a perfectly pitched at the Donmar, packing a terrific punch in its message through subtlety and without resorting to overt preaching. Director-choreographer Rob Ashford injects real momentum into the song-and-dance sections which act as a falsely cheerful counterpoint to the hideous actions taking place.

The ensemble (many doubling up in multiple roles) are just that, a truly solid company giving their all and adjusting to the confines of the Donmar with admirable conviction. Bertie Carvel as Leo is totally convincing as he tries to extricate himself from these unbelievable accusations. Lara Pulver as his wife Lucille is very moving as the only person who believes his side of the story. The whole thing will have you weeping through your applause. Once again the Donmar has produced gold out of was once thought to be a non-mineable vein of music-theatre.