The annual Park Lane Group bonanza of young artists and new music, ten concerts in five days, began here with Tamsin Waley-Cohen in an impressive showcase of challenging music for solo violin. She carefully charted George Benjamin’s Three Miniatures and captured well the music’s deep expressiveness and acerbic demonstration, and then gave a compelling account of Brian Ferneyhough’s Intermedio alla ciaconna, finding its lyrical core amidst the spiky activity, a non-stop piece with the score laid-out over four music-stands. The premiere of Richard Causton’s Fantasia and Air introduced a busy study that pauses at its mid-point to become a thoughtful reflection and statement of the inspirational melody. What a shame that György Kurtág felt unable to release Hipartita, a significant work, it seems, deciding to leave it for the time-being to its original performer, Hiromi Kikuchi. Instead Waley-Cohen essayed two of Kurtág’s shorter sketches: In Nomine – all’ongherese, free yet painstaking and drinking from Hungarian roots, stopping rather than ending, and Hommage à JS Bach, an open-ended meditation. The UK premiere of Barry Guy’s Lysandra cued a vivid if discursive work, inspired by the baroque violin and intended, with two other opuses, as complements to Bach’s solo-violin sonatas and partitas, yet emerging as quixotic and colourful.

It was all-change for the second of the two recitals, with neither the Vardanyan Quartet nor pianist Ching-Yun Hu able to appear; this meant keenly-anticipated pieces by Simon Rowland-Jones, Kenneth Leighton and Nicholas Maw had to be dropped.

The ‘silver lining’ was Ksenija Sidorova, who would not have otherwise appeared, for she has the ability to steal a musical heart; certainly she gave a flawless display on her classical accordion playing most of her chosen pieces from memory, and although seated, her bodily motions were rather balletic. She opened with Like a Water Buffalo by Yuji Takahashi, and presumably Sidorova’s introductory spoken words were the Wendy Poussard poem that the composer cites. The music itself, rhythmically engaging and whimsical, as well as folksy as befits “Thai protest songs”, was played with sympathy and character. Luciano’s Berio’s Sequenza XIII also compelled, its sepulchral glower and decorous flights of fancy given a knockout performance. From Edward McGuire’s Preludes (a series of twenty-one such pieces for diverse instruments), Number 12, for accordion, enjoys quirky oscillations, cosy expression and vibrating entreaties. Arne Nordheim’s pointillist and shrouded Flashing completed Sidorova’s contribution; she is an amazingly accomplished artist. 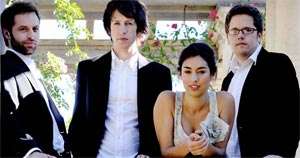 The Solstice String Quartet coupled two contemporaneous, mid-1930s, pieces. In his centenary year, it was good to hear Samuel Barber’s Opus 11 and to be reminded of the now-universal Adagio in its original context and scoring, here given a flowing, deeply felt and dignified traversal. The first movement, of classical concision and overt romanticism, expressive and volatile, found the players alive to all its moods, Gregor Riddell’s cello a particularly resonant bedrock. Bartók’s Fifth String Quartet, for all the ensemble’s homogeneity and well-judged balance, was not as rebarbative than can be the case, the outer movements living less dangerously than they should. The first of the two slow movements was heartfelt and inward, however, and although quality of sound and its projection seem paramount to these players, sameness set-in too early, and this virile and vibrant music was rather too objectively set-out despite the musicians’ lucidity and dedication.