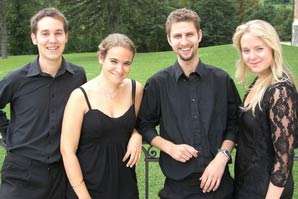 The Piatti String Quartet, from the Royal Academy of Music and Royal College of Music, were performing with a temporary viola player (Hannah Niemela) while its permanent viola’s wrist mends. She was very good, and fitted in well with the ensemble’s finely attuned, dark-inflected sound. They gave the London premiere of Songs for the M8 (2005) by Anna Meredith, the maverick soundsmith who is still convincingly blurring the boundaries between types of music – her fans have her Beatbox Concerto to look forward to next month. Songs for the M8 is her response to pieces of public art to be seen on the motorway between Edinburgh and Glasgow. On the evidence of these five miniatures, there is no doubt that she has a fantastic ear and off-beat imagination, conjuring up some fine effects with glissandos and harmonics, and with a particularly rewarding viola solo in the third piece – and the content of the pieces suited their scale. There’s a version for string orchestra, but its quirky, pithy wit seems made for the immediacy of a small ensemble.

In terms of sound, Simon Wilson’s cryptically entitled A Slight Angle to the Universe (2004/5, London premiere) is much more in the conservative quartet idiom, with a strong, worked-through structure, and its agitato sections very much in the area of early Schoenberg hysteria, again played with considerable panache by the Piatti players. With its passages of high intensity, it’s the sort of music you suspect has a programme beyond the composer’s matter-of-fact description – the piece is ‘about’ staying on the periphery in order to sustain clarity and purpose, but I think you would have had to read the programme notes first to have any chance of discerning that.

The Piattis’ last piece was Britten’s String Quartet No.1, played with a freedom and range of expression that clearly belonged to the visionary freshness of Britten‘s “Peter Grimes” period while anticipating the disembodied transcendence of the Third Quartet. The seraphic, “Rosenkavalier”-like close harmony of the opening, gently indented by the cello’s pizzicatos, beautifully realised by the players, was a reminder of Britten’s extraordinary originality.

In terms of sheer musicianship, the second concert of the evening was just as impressive, although the pieces from the past 20 years (and one from the 1960s) were rather more variable. 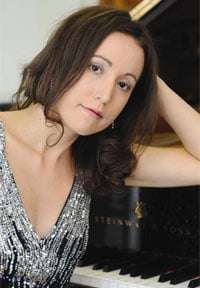 The prodigiously gifted Maria Marchant was the solo pianist in two big pieces, Kenneth Leighton’s Six Studies (from the late-1960s), and Kenneth Hesketh’s Poetic Conceits, written in 2006. The Leighton work is stunning, in a style that filters Debussy, Bartók and Messiaen into a robustly romantic and personal idiom. Leighton (1924-88) was, by all accounts, a fine pianist, and these six variations explore pianism and form very satisfactorily, with an impressive build-up to the incandescent conclusion. Maria Marchant’s unfussy, emotionally charged and superbly virtuosic playing caught Leighton’s brand of fierce romantic mysticism, and one can only lament Leighton’s undeserved lack of recognition.

Maria Marchant’s second work was Hesketh’s Poetic Conceits (which she played from the score), a 30-minute, six-movement piece that attempts to convey the use of literary conceits in terms of music. Without Hesketh’s rather portentous explanatory programme-note, I don’t know how much of this the listener would have picked up. The music has a strong improvisatory quality, with huge chords and passages of furious yet static activity that seem par for the course in contemporary piano music, and the unbidden idea surfaced that the piece was a sort of update on Pictures at an Exhibition. On one listening, it had a limited expressive range and required stamina more than anything else to bring it off – which Maria Marchant has in abundance, but there is more to her playing than muscle power.

If you go for the keening, overwrought side of the cello repertoire, then In memoriam Kenneth Leighton (1990, London premiere) by Edward Harper, for cello and piano, is for you. It is certainly well-written for the instrument, and was persuasively played by Richard Birchall (for whom, I suspect, this piece has special significance) and pianist Clare Hammond, but its heart-on-sleeve emotionalism quickly made its point and then continued to make it.

Richard Birchall is a very impressive player, and his subtle, fastidious musicianship was much better displayed in Robert Saxton’s Sonata for solo cello on a theme of William Walton. The piece is really a set of variations followed by the theme. I’m not convinced that a theme (unless it‘s something really familiar) is revealed by some preceding variations, but this particular conceit continues to exercise composers, and Saxton’s music is seductively attractive, and was played in big romantic style.

Like the Leighton, Sally Beamish’s Bridging the Day (1998, London premiere), for cello and piano, was a revelation. Six interlinking sections evoking the effects of natural light, the work has a strong visual flavour, rather like a set of wood engravings. It has a very British visionary quality, and Richard Birchall’s and Clare Hammond’s performance could not have been more in tune with it.