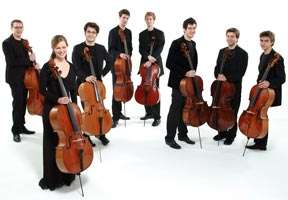 Cellophony (eight cellists) made a brilliant start to the week; any sense of sameness of instrument was avoided with dedicatedly varied accounts of some notable pieces. Luciano Berio’s Korot launched proceedings in a state of suspended animation, somewhat agitated, the music’s unisons and conversations made compelling until a dying away, muted, literally. Adam Gorb’s Into The Light immediately suggested the dark world of Sibelius’s Fourth Symphony, a piece that gradually escaped such a maze into lyrical acceptance and Tippettian radiance and beauty. Pierre Boulez’s Messagesquisse, for solo cello (Rostropovich originally) and a six-cello consort has a fragmentary and pregnant opening until exploding with verve and precision if not without further rumination. Unfortunately Richard Birchall (a member of Cellophony) was a little overshadowed with the premiere of his Mirrors, with perhaps too many glissandos and pizzicatos, although there was an engaging rhythmic élan. Finally, Violoncelles, vibrez! by Giovanni Sollima, somewhat ‘cut and paste’, the extravagant cadenza for two cellists not seeming to belong for all the bravura (full-on here) needed to bring it off. Otherwise the music’s gracefulness was rather lovely and the witty fade-away was beautifully managed. 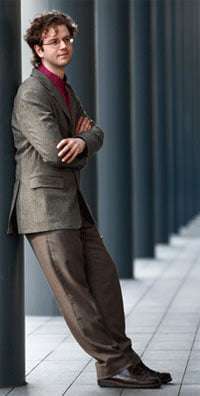 The second recital featured soprano and piano, and piano solo. The latter was in the control and charisma of Néstor Bayona Pifarré whose dedication to his four tasks leapt off the platform. But three of the foursome failed to compel despite such sterling advocacy. The first performance of Ciutat del color del so by Jamie Pui-Ling Man never really lived-up to its billing of being Barcelona- and Gaudi-inspired, her ‘city colours’ (including some ‘inside the piano’ timbres) seeming no more than nebulous and clustery. Another Gorb piece, Absinthe, emerged as nondescript and disconnected, and Cristóbal Halffter’s Cadencia was simply irritating in its repetitions and anonymous in its thrashing around. Pifarré had opened with Simon Holt’s Tauromaquia, as assaulting as it is reflective, its material distinctive and with powerful organisation.

Both Rhona McKail and Yshani Perinpanayagam are persuasive performers and make a notable duo. McKail had a perfect introduction in two short song-cycles by Lord Berners, one setting German texts, the other French, Berners’s style adapting to the words and emulating Berg and Pfitzner in the German cycle, and then Debussy, Hahn, Poulenc and Satie. McKail is a lively performer, vividly living the words, and impressively singing her entire programme from memory and with well-judged characterisation. Quite sassy in fact! Perinpanayagam is a sensitive accompanist without being indistinctive, and she had her own words to intone, during Joe Cutler’s In Praise of Dreams, arguably the standout work of the whole evening and brought to life by McKail’s magnetic personality, operatic at times and with touching refrains, the cycle outdoing Cutler’s pupil Charlotte Bray’s Midnight Closes (setting Thomas Hardy), the opening number too close to Britten’s The Turn of the Screw (if a fine stylistic model). For all that McKail is a sensitive singer who can spin a long and shapely line, it was Peter Dickinson’s Three Songs from The Unicorns that stretched the singer’s top register beyond itself. Tone and intonation suffered (as they did elsewhere) and there were scraggly phrase-ends. Something to address, for Rhona McKail could well be a notable Lieder and dramatic singer.