Never an outfit to do things by halves, the PLG’s Young Artists series fielded a blinder for its closing main concert. Following this year’s new format – a linking of who likes, champions and is inspired by whom (something composers will never fail to do, so long as there‘s music, I’d have thought) – Friday’s “Frontline Composer” was Poul Ruders (interviewed earlier in the evening), with links to Ligeti and Penderecki, and his “Frontline Choice” was Philip Cashian, currently head of composition at the Royal Academy of Music. 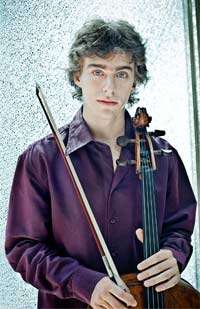 The concert was also a showcase for the considerable talents of the 23-year-old Spanish cellist Pau Codina. The two contemporary pieces he played, Shifting Light by Michael Cutting and Picture for Emily by Adam Coombs (both premieres), are both eloquent testimony of the cello’s expressive range, finely-made pieces that really inhabit the instrument. The Cutting is an uncannily precise realisation of the work of Jacob Kassan, an American artist whose trademark monochrome, opaquely reflective surfaces have a Rothko-like solemnity and create a haunting, many-layered relationship with the viewer. Codina refined his sound palette to extremes of audibility, tone and evolving shapes, and the sudden eruptions in the music caught those flashes of empathy between the object and its beholder. The scale of the piece is well suited to its powers of evocation, and was played with impressive control of detail.

Codina was just as persuasive a player in Coombs’s Picture for Emily, a quietly passionate piece, with a touching look back to the Elgarian realm of tender character depiction, lushly harmonised with a Bachian striving searchingly played. I very much liked the sound of Emily and half-expected her to appear with the composer when he took applause. Codina was superb in the grotesqueries of Penderecki’s Divertimento, although the broader expressive possibilities of Ligeti’s Sonata for Solo Cello suited him better. I very much hope to get the chance of hearing this fine musician again, in repertoire that will give more extended rein to his obvious technical and lyrical gifts.

There was a visual connection to Philip Cashian’s Samain, for string quartet, namely the painting of the same name by Leonora Carrington, the British-born Mexican surrealist artist. The elements of heightened, almost magical, realism were brilliantly brought to life by the members of the Benyounes Quartet. I kept getting flashes of Debussy’s Jeux – not so much in the sound but in the mercurial, evanescent spirit of the piece – and the hysteria of the finale evoked the extremes of Carrington’s extraordinarily vivid life. The four players were excellent, with a discreet but rich viola and rhythmic and nimble cello aerating Cashian’s elaborate textures.

The longest work was Poul Ruders’s Serenade on the Shores of the Cosmic Ocean for string quartet and accordion, a nine-movement piece with epic, mystic inspiration – Huxley, Darwin, Kalahari desert bushmen, Conrad, Shakespeare – underpinning its cosmic aspirations. Resistance to Ruders’s guru-like brand of elemental minimalism and directness of appeal is futile, as it is to the extraordinary virtuosity of the 22-year-old Lithuanian accordionist Martynas Levickis. Ruders’s ear is phenomenal, and the way he blurs the open resonance of the strings and the contained, reedy sound of the accordion is pure magic – and magically played by Levickis and the Benyounes members. The combination of volatility, precision and differences of instrumental attack was breathtaking, and the assimilation of string sound by accordion and vice-versa was captivating. The photogenic Levickis is quite a superstar in Lithuania, and his various lively outings on YouTube give an idea of his range. The immediacy of his performance connected strongly with this audience.