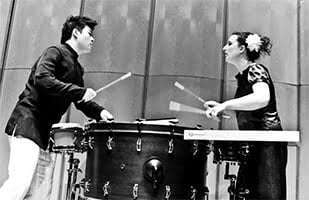 It’s not that often that music for percussion becomes detached from the sweaty physicality needed to produce it. So it’s greatly to the Aurora Percussion Duo’s credit that there were several instances in their share of this PLG concert when the listener could almost bypass them. Delia Stevens and Le Yu are extraordinary performers, seemingly joined at the hip as far as their elasticised feel for rhythm is concerned. For all the extravagant range of movement, though, their main impact emanated from stillness, with energy output finely controlled and not a gesture wasted, and the intimate and sinuous flow of leadership between the two of them was a joy to watch.

In his brief note to the first piece, Avner Dorman didn’t begin to explain the significance of reversing the two words in its title to UdacrepAkubrad (he wrote it in 2001 for the Percadu Duo and featured darbuka drums in his instrumentation). Two marimbas bustled around within the restricted harmonies and flirted virtuosically with the unpitched percussion. The piece has a relentless, pianola-like blocked energy and closes with a brilliantly realised sense of dispersal. Casey Cangelosi’s Plato’s Cave had the two players sitting on the floor, with just a pair of hard sticks and their hands to create, or suggest, sound. Cangelosi’s inspiration for the piece was the exchange between perception and reality, and in the context of its short span and simple choreography Plato’s Cave is a cleverly imagined exploration of disconnection, fed by a flickering, eruptive vivacity that even gives you time to contemplate the sound of no hands clapping.

Of the duo’s five pieces, this was the most involving, but it didn’t have the irrepressible wit that infused Stephen McNeff’s Baristos!, his amazing collage of hissing, coffee-bean-rattling and possessed marimba-playing – think Pacific 231 reconceived for one of those gleaming espresso machines – an eloquent homage to the art of the barista, in which the Aurora Duo’s confident theatricality was as vital as the precision of their playing. Nicholas Stuart’s Elysium (its first performance and a PLG commission) showed off this 25-year-old composer’s acute ear for nebulous washes of sound from bowed cymbals and eerily pure glass harmonica, played with Zen-like inscrutability, in great contrast to the duo’s blockbuster of a finale, Nebojsa Jovan Zirkovics’s Meccanico, a finely engineered blur of rhythmic patterns and ferocious energy. The Aurora Duo was terrific, zooming in on the wildly differing characters of each piece with an immensely attractive sense of engagement, both with the music and with the audience.

The difference between them and the Polish classical accordionist Bartosz Glowacki in four substantial, rather withdrawn pieces was marked, and Glowacki explored the suggestive, oblique possibilities of the accordion sound with impressive authority. It’s slightly disconcerting to see the instrument being played, in that the phrasing doesn’t always relate to the mechanics of the air supply, but Glowacki’s playing transcended this with impressive musicality. Berio’s Sequenza XIII retreated into baroque-style introspection, with intricately worked-out vibratos and sighing exhalations. Richard Causton’s Ricercar (another first performance and PLG commission) veered closely to organ idiom, enhanced by a choral tune lurking subliminally. Magnus Lindberg’s Jeux d’anches has a grandeur of expression you wouldn’t always associate with the instrument, with some wonderfully frenetic activity suspended over growling pedal notes, and I greatly enjoyed the Hindemithian rigour of Edward McGuire’s animated Prelude No.13.