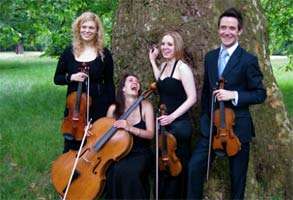 This final concert in the Park Lane Group’s week-long “Bravo Beethoven!” series included performances on a commendably high level. The Cavaleri Quartet is an unusually well-blended group with a personable violist very present in the overall mix and a characterful second violinist who could with ease alternate with the Leader, all of them recent alumni of the Royal College of Music who have been coached by members of the Berg, Brodsky, Chilingirian, Medici and Endellion Quartets as well as appearing at Wigmore Hall and in PLG’s Young Artists New Year Series held in the Purcell Room at Southbank Centre. The Cavaleri members played two of Beethoven’s most forcefully dramatic creations for string quartet.

The ‘Serioso’ has an almost symphonic weight – Mahler adapted it for string orchestra – but on this occasion, despite a finely judged and heartfelt slow movement, it was only partially successful. St James’s Church has a particularly reverberant acoustic and the group’s headlong tempos for the outer movements – for all their ‘fast’ markings – threw up problems; at these speeds the music frequently lost some of its impact. The first movement in particular is Beethoven at his most aggressive, a series of jagged motifs – often in unison – which depend on precise rhythmic articulation, the movement eventually drifting out of earshot in a kind of furious mutter. Here it all sounded a little too fleet to generate its full momentum.

By contrast, Yasmin Rowe’s account of two Bagatelles – one early and one late – showed a young pianist judging the difficult acoustic well and penetrating to the core of the music with a natural cantabile. The dry Fazioli piano is undoubtedly the right instrument in St James’s. Opus 33/2 is Beethoven at his quirkiest, its off-beat left-hand interruptions here hammered out rather too forcefully, but in the example from Opus 126 (Beethoven’s unusual marking is Cantabile e compiacevole) Rowe intuitively found a wholly apt stillness.

The thunderous ‘surprise’ item brought complete contrast. Each concert this week has included an unannounced work, the composer to be identified by the audience. Gaudi (1970) is an extended and extremely demanding work by John McCabe (himself a fine pianist). Rowe attacked this Study with the total confidence of youth, eliciting remarkable virtuosity and range of tone colour, using the church’s extended reverberation to good effect. After several incorrect guesses, one member of the audience knew the identity of the composer and walked away with a bottle of champagne.

‘Les adieux’, another of Beethoven’s trajectories from darkness to light, was the culmination of Rowe’s recital and was consistently illuminating from its first hesitant bars (like the intake of breath on the delivery of bad news) to the outburst of joy in the finale (‘Das Wiedersehen’, The Return). Rowe has a fine feel for the sheer oddity of much of Beethoven’s writing and in the central ‘Der Abwesenheit’, Absence) one was thinking of that moment in the final string quartet (Opus 135) when Beethoven writes “Muss es sein?” (Must it be?).

The Cavaleri’s account of Razumovsky No.2 (there are three) brought some good things, notably the elevated Molto Adagio second movement marked to be treated with deepest emotion; the players’ cultivated blend of sound trod that fine line between sentiment and sentimentality, and really did justice to the music. The outer movements though would have repaid a tougher, grittier approach, the opening flowing just a little too easily for Beethoven’s abrupt switches of direction to make their full effect, and the finale – Beethoven in manic jig mode – was distinctly well-mannered. It’s music which breathes country air and has a ferocious bucolic energy.