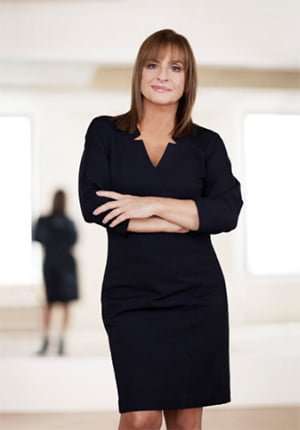 On Broadway Patti LuPone created the role of Evita, and in London Fantine in Les Misérables. She has won several Tony Awards, including for a recent revival of Gypsy and for the musical version of Sunset Boulevard in which she was the first and best Norma Desmond. She is immensely talented, possessed of a remarkable singing voice that can reach to the rafters or move one to tears. She is a fine dramatic actress, too, and has a great sense of comedy – she needed all of those talents to get away with what she offered here.

Her show is billed as a one-woman event, hosted by her pianist Seth Rudetsky, who at the start of the evening explained that he has a daily show-music radio programme in the States (“I’m the American Elaine Paige”). He’s a very funny man, though he speaks so fast that some of the humour gets lost. There were television screens around the auditorium to illustrate some enjoyable mishaps, including the hilarious performance of ‘June is bustin’ out all over’ by Leslie Uggams, who forgets the lyrics after the opening line and then ad-libs the rest in a sort of rhyming gibberish. But it was a surprise when Rudetsky’s act went on for forty minutes, to be followed by a twenty-minute interval.

At last, after the break, LuPone appeared, her voice soaring effortlessly through a spine-tingling ‘Everything’s coming up roses’. “Sing out, Louise”, cried someone in the audience, provoking a response, “Whadda ya think I’m doing?”, after which LuPone seamlessly resumed the song. On the stage were a grand piano and two armchairs. Throughout the rest of the evening the songs were interspersed with biographical questions from Rudetsky, with an occasional request from the audience. Though he asks how she came to be cast in most of her major hits, Rudetsky assured us that the questions (and the songs) would vary from night to night.

Some of the facts are indeed fascinating – LuPone turned down the role of Fosca in Sondheim’s Passion in order to do Sunset Boulevard, which she describes as “an ugly experience”, and Evita was not her first Tony nomination – she had received one for her appearance in a touring version of The Robber Bridegroom, which had a brief stopover in New York (in the only year that a brother and sister had been nominated, Robert LuPone was playing Zach in A Chorus Line) and from which she sang ‘A sleeping man’. Another rarity is a number she introduced in a musical based on the Pedro Almodóvar movie, Women on the Verge of a Nervous Breakdown. One of the requests she delivered was ‘A fine life’ from Oliver! – she played Nancy in a short-lived Broadway revival – but she was alas unsure of the lyrics. The presence of fellow-performers in the audience prompted her to bring them up to duet with her on moments from Les Misérables and the ‘High flying adored’ sequence from Evita, though she again required sheet music or prompting.

Perhaps one should not be too critical of a show that is intentionally unpredictable – Rudetsky asks the audience to come back on the basis that each night will be substantially different. LuPone has accurate recollection of her trademark numbers, and it is still exciting to hear that unmistakable timbre for ‘I dreamed a dream’ and ‘Buenos Aires’. One also gets to hear her views on audience members who take photographs or use their mobiles (a topic that put her in the news recently), her description of what makes a “belter”, why she says Evita was “the most miserable experience of my life”, and her views on Andrew Lloyd Webber and Stephen Sondheim: her version of the latter’s ‘The ladies who lunch’ from Company was here absolutely breathtaking and alone virtually compensates for the disappointing first hour and the forgotten lyrics.

The evening is a love-in for which normal rules barely apply. The standing ovations and the deafening roars that could no doubt be heard all the way up Charing Cross Road indicated that her fans were more than satisfied.