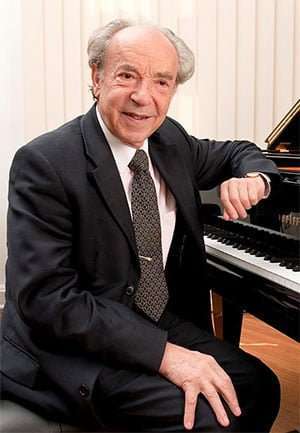 Paul Badura-Skoda (who is a young-looking 86 years of age) recorded the complete Beethoven and Schubert Piano Sonatas on period instruments at a time when this was quite rightly considered somewhat eccentric, and while his discography runs to several hundred other titles, to hear him live – and especially in a composer he is not usually associated with, Chopin – was an interesting prospect.

The A minor Waltz opened with what you might expect of an authentic-instrument devotee, with no sustaining pedal and virtually no rubato; there was also a lack of rhythmic definition, some wrong notes, and the right-hand in particular was rather stiff, and these traits would recur to a greater-or-lesser degree throughout the recital. Rather strangely after only a few bars the pedal came into play, and each of the Waltz’s sections elicited a change of touch and tonal shading. Unfortunately Opus 64/2 was very untidy, and yet No.1 was swift and clean-fingered, and with a touch of rubato. The Nocturne was ruined by latecomers making their way to their seats while Badura-Skoda was playing, and also by his rigid, ungainly approach to this famous work. In the Opus 30 set of Mazurkas there was some expertly judged tempo-variation and highly individual phrasing that sat uneasily with a lack of delicacy and plasticity of rhythm. The Barcarolle is often played too loudly, a fault that Badura-Skoda just about avoided; the trills scattered amongst bars 11 to 22 were suitably refined and varied but the extended sequence in bars 23 and 24 was too loud; fortunately the central section was beautifully voiced, although the accelerando into the left-hand octave passage was unnecessary.

The third of Schubert’s D935 Impromptus is a set of five variations on a theme derived from – but not identical to – the ‘Entr’acte’ from the composer’s music for Rosamunde. Once again the sustaining pedal was gradually introduced, the dotted rhythm of the first variation was under-characterised, the richly ornamented line of the second was scarred by errors and Badura-Skoda seemed to lose concentration as the work progressed to its serene conclusion. The pianist then gave a short speech about the sublime opening of D960, where he mentioned that this was a presentment of death and how the words of a Christian prayer about the Lord bringing peace fitted the melody. That first subject was played at a flowing tempo. But as the theme progressed, rubato and subtle changes of tempo were introduced and the recurring left-hand bass trills were differently voiced. There was no change of tempo for the second subject, but there was some delightfully quirky rhythmic difference in the transition to the exposition repeat, which Badura-Skoda used to vary his presenting of the ideas. The development spans a huge emotional range, and the pianist just-about surmounted the technical hurdles, although greater power and focus in the fugato section wouldn’t have gone amiss. He also emphasised the left-hand in the recapitulation’s statement of the second subject, which almost made it sound like counterpoint, and the trills became ever more dark and threatening.

It would be nice to say that the spectral slow movement was up to the same standard, but it was too swift and loud. There was however some recompense in a sprung account of the scherzo during which the trio was taken in tempo. The opening of the finale was very fast, but after a few bars there was a slight relaxation in tempo, and the phrasing and atmosphere brought the first song of Die schöne Müllerin (‘Das Wandern’) to mind; once again there was no tempo change for the second subject, the fugato section was very powerful and driven, and there was some impish phrasing prior to the coda. Unfortunately there were also a lot of wrong notes and the Presto marking for the coda was ignored. Nor – despite the standing ovation – were there any encores.