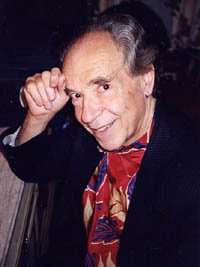 Paul Badura-Skoda is one of the world’s oldest still-performing pianists – he turned 80 last year and is now at the end a world tour. He is also one of the world’s greatest pianists. On the London scene, he is a disgracefully neglected musician. His last London recital was over 20 years ago.

Edwin Fischer was his teacher. Furtwängler was his mentor. Karajan fostered his career. Badura-Skoda is a pianist honoured in his own country – Austria – as well as in France, Germany and the USA, but hardly at all in Britain. His awards include the Bösendorfer Ring (1978) and Chevalier de l’Ordre des Arts et des Lettres (1997). He was a pioneer in performance on ‘period’ instruments. With his wife and Jörg Demus, he has written books on the performance of Bach and Mozart and has edited Beethoven’s piano sonatas.

The opening Haydn sonata was vigorous and robust and had authority. It sped around the Wigmore Hall, lively and adventurous. Badura-Skoda grasped ornamentation by the throat, pressing it into the music’s main thrust, making it integral rather than decorative. He skimmed down arpeggios as if they were ropes to swing him over to the next branch. He did not play Haydn as if the notes were Dresden shepherdesses, liable to break if handled too roughly. His Haydn was brusque and mercurial, on fire with a myriad of fascinating ideas – modern!

I shall never forget the Beethoven. It had majesty, grandeur, vigour, serenity and compassion. Badura-Skoda does not wear his emotions on his sleeve – even less his phrasing or his rubato. There is no ‘interpretation’ – rather, the energy and the notes. As a result, those who hear but do not listen encounter a performance that merely reproduces the notes, dispassionately and unemotionally. Badura-Skoda’s emotion lies in the pressing onward flow of the music’s communication, in his stream of restrained passion, expressed – magically and miraculously – through notes and fingers and expressing fearsome dark forces, alternately active and quiescent. Yet their dangerous power is intrinsic, alive and creative.

Suddenly the gritty turbulence softens. Then, during a short, enthralling transition of inimitable softness, Badura-Skoda gently led us towards our first meeting with the second-movement ‘Arietta’ Theme. Its first manifestation was very much of this world – deeply human, imbued with earthly understanding of sorrows that lie within the human predicament. Helter-skelter Variations follow, scurrying and rapid. On second appearance, the Theme is transformed: it now has wisdom, together with an astonishing, restrained affirmation of human dignity. Finally, in a further re-statement of glittering, stellar precision we heard the theme being raised through the heavens, supported by the soft fluttering of angels’ wings, utterly serene and timeless. I can only, deeply, thank Paul Badura-Skoda for leading me towards this experience – and honour the emotions, technique and supreme musicianship he brought to doing so.

As if on a high, Badura-Skoda volunteered his encores promptly. He began with Schumann’s Träumerei (from Kinderszenen), unsentimental, and finished with a most attractive late-Romantic piece, by Hans Gál (if I heard correctly). The highlight was Schubert’s A flat Impromptu (from the D935 set). Badura-Skoda began loud and chordal, giving us a brazen hymn to optimism. A scurrying trio followed. The main theme returned, but transformed. Simply by playing it more quietly and more lightly, Badura-Skoda’s fingers found fragility and pathos in what had originally sounded as bombast. In the unerring, simple effectiveness of this miniature, he once again showed his greatness.