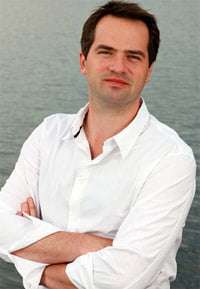 Many of the programmes in this season’s International Piano Series have burrowed deep into the European repertoire, but the Swedish/Polish pianist Peter Jablonski’s recital is the only one to give American piano music an airing – Jablonski has a particular affinity with George Gershwin, and the second half of his programme bristled with twentieth-century American can-do optimism and bluesy, unabashed sensuality.

Reports of Jablonski’s disarming openness and the generosity of his playing were more than confirmed. But there was a great deal more going on – in terms of his acute response to style and scale, with moments of heart-stopping lyricism, barnstorming bravura and coruscating brilliance.These all came together in the Liszt, and from its cavernous opening, on the cusp between notated noise and music, you knew you were in for a thrilling ride, with Jablonski juggling the work’s elements of Byronic introspection and dazzling display with effortless panache. This big-scale piece pushed Jablonski’s romantic flair to a level of intensity and immediacy that had you on the edge of your seat. His playing had the sort of magisterial certainty that you used to get from Jorge Bolet, and Jablonski was superb at suspending the transformed final appearance of the main theme over a seething cauldron of red-hot accompaniment.

The temperature dropped considerably in the Grieg, a Schumann-lite parade of variations on a Norwegian folksong that is too long and has a histrionic climax that tries, unsuccessfully, to yank it out of its domestic comfort-zone. Jablonski’s programming of it made sense, in that it showed off other, more intimate aspects of his range, touch and sound, and I defer to all the great musicians, including Jablonski, who sing the praises of Grieg – but I just don’t get it.

Jablonski’s command of style had a full work-out in Gershwin’s Preludes, their jazz-inflected inspiration played with unselfconscious freshness and, in the amazing arrangement of Embraceable You by Earl Wild (the American pianist who, to put it mildly, was nuts about Gershwin), considerable and easy virtuosity. Jablonski had the veiled, sexy melancholy of Copland’s Blues to his fingertips, slightly aloof, suggesting more than it gave away in playing every bit as penetrating as in the Liszt. There are moments of a Hindemithian rigour in Samuel Barber’s Piano Sonata, which Jablonski imbued with great clarity. The last of the four movements, a fugue, is the best, and Jablonski went for its massive textures with a searching, breathtaking vigour.

In what has been an outstanding series, this recital was especially impressive.