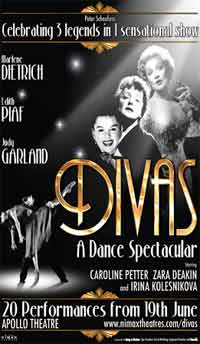 Dancer, choreographer and director Peter Schaufuss has worked in ballet companies all around the world. He started at the Royal Danish Ballet School at seven years old and was subsequently taken into the company. He then joined Canadian National Ballet and later London Festival Ballet and established himself as an international guest artist with such companies as the Mariinsky (Kirov), American Theater Ballet, Paris Opera Ballet and The Royal Ballet in London. He worked with Balanchine at New York City Ballet, with Roland Petit at Paris Opera and Kenneth MacMillan and Frederick Ashton. He has produced ballets for many companies and now has his own, Peter Schaufuss Ballet.

In recent years Schaufuss has concentrated on mounting ballets about iconic figures, including Princess Diana. His last work in London was “Satisfaction”, a ballet to the music of The Rolling Stones. “Divas”, first presented in Århus (Denmark) in 2004, now receives its London premiere. Schaufuss’s inspiration came from seeing Marlene Dietrich perform in Copenhagen in the 1960s. In taking music associated with her, Edith Piaf and Judy Garland, and creating dance to complement it, Schaufuss says that “the performance has to be seen as a whole – as an impressionist painting, expressing feelings of love, hate, contempt, joy, disgust and guilt, and showing small pictures through a pattern of movements, allowing the audience to interpret it for themselves.”

If all sounds rather high-falutin’ – and it is also difficult to work out what Schaufuss is aiming to do. Three disparate but iconic performers known for their singing and acting, from roughly the same period, are represented by three dancers, each diva having her own ‘throne’, a sort of high-backed metal chair, to hide behind or emerge from. The rest of the company dances around them while we listen to old recordings of some – but not all – of their signature songs. The three dancers playing the divas are more like catwalk models parading their outfits while the chorus acts out scenes or memories of the stars’ lives. 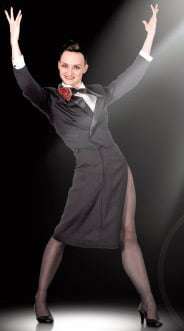 Dietrich is dressed in the familiar big white fur coat, which reveals her skin-tight sheath dress; Piaf wears red even though she was usually seen in black; and Garland sports the female equivalent of a tuxedo. Other details include Garland’s red shoes from “The Wizard of Oz” and her habit of sitting on the edge of the stage. High-spirited French can-can dances evoke Piaf’s Paris, and an army of stormtroopers and Hitler Youth appear for Dietrich, even though she was away in Hollywood during World War Two. This is stretching things; and, when these Nazi boys prance and preen and clutch their own bottoms while the Gestapo girls in tights and Hitler moustaches ‘Sieg Heil’ their way across the stage, these kitsch effects can only remind us of Mel Brooks and “The Producers”.

Some of the choreography looks awkward, verging on the uncomfortable, and much of it appears to mean very little, although it has to be said that the company is very talented. Maybe a narration on the stars’ lives or a mime for each performer would make the show seem more relevant. As it is, the dances do not illuminate the divas’ lives but obfuscate them.

There have been shows on each of these great ladies of the theatre that have worked better than “Divas”. Sian Phillips created an uncannily true performance as Dietrich, Pam Gems had the last word on Piaf and Garland has been feted everywhere, not least on television by Stanley Baxter who managed to recreate her ‘Born in a trunk’ number in stunningly accurate detail.

Maybe this is what Schaufuss’s show needs: three impersonators who can make these larger than life personalities come to life. The choice of music is sometimes odd. Even though original recordings illustrate each piece, the obvious songs are not always used. Most of Piaf’s most-famous numbers, such as ‘Milord’, ‘Non, je ne regrette rien’ and ‘La vie en rose’ are included but, in the Marlene section, although we hear ‘Ich bin von Kopf bis Fuss…’ (Falling in love again), ‘Ich bin die fesche Lola’ (They call me naughty Lola) and ‘Sag mir, wo die blumen sind’ (Where have all the flowers gone?), we don’t get ‘Lili Marleen’, arguably Dietrich’s most-famous song, or ‘See what the boys in the back room will have’ or ‘The laziest gal in town’. All Dietrich’s recordings here are in German, although she was probably better-known for singing in English. Surtitles might help.

For the Garland section, apart from ‘Over the rainbow’, ‘The boy next door’ and ‘Meet me in St Louis’, the other songs are standard repertoire not particularly associated with her, although she sang a good deal of the Great American Songbook material in her time. But ‘The man that got away’, ‘You made me love you’ and ‘Swanee’ are not included.

Peter Schaufuss is responsible for virtually every aspect of “Divas”, from choreography and direction to sets, costumes and lighting design. He presents his three divas against a backdrop of coloured lighting effects representing Paris and the Eiffel Tower for Piaf, the Brandenburg Gate and bomb-damaged Berlin for Marlene and the Empire State Building and the Brooklyn Bridge for Judy. There is pizzazz in the look of the show, but the dance element lacks depth and trades on stereotypes. After the show is over, we really don’t know any more about these three ladies. That said, it is an entertainment that should appeal to a wide range of patrons.

Surely in a dance-show it is vital to see the dancers’ feet. But, at the Apollo Theatre, the raised platform upstage hides this aspect behind a bank of lights – which means the audience in the most expensive front-stalls seats cannot see the footwork. You would be better off sitting upstairs in the Dress Circle. Even if these fine dancers need something better to occupy their talents, whatever they do deserves to be fully seen.