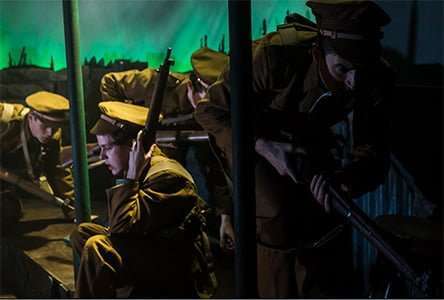 However far-fetched the premise, a work of fantasy still needs to operate within its own logical parameters. Breach those boundaries and the audience’s suspension of disbelief flies out of the window like Peter Pan. In Lost Boy, polymath theatre-man Phil Willmott’s reimagining of J. M. Barrie’s aerial defenestrater, it is easy to accept that the author’s adopted son George Llewellyn Davies may conceivably fall into an uneasy sleep in the Great War trenches and dream of the boy who wouldn’t grow up as being his alter ego in the real world; but when Tinker Bell, now a fallen woman, bemoans her tragic earthly state by saying (fable alert) “on my first night here, men pulled my wings off”, eyes roll. Such moments belong in Candide, not here.

While there is a lot wrong with Lost Boy, it is laudably ambitious in scope and an awfully big adventure for the pocket-sized Finborough Theatre to pull off. The narrative through-line is elaborate yet sure-footed, Philip Lindley’s evocative set of shattered glass, corrugated iron and battlefront imagery is a miracle of economy (and superbly lit by Miguel Vicente) while the inventiveness of Racky Plews’s choreography for twelve players in such a tiny space defies belief. The busy score is tightly rendered by the actors and three instrumentalists, and the whole enterprise is put across with the utmost professionalism and engagement. 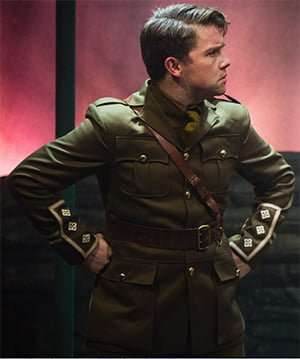 Steven Butler is a versatile young actor who brings charm and gravitas to a Peter Pan who has all the playfulness knocked out of him by the experience of war. His fellow bastion is the veteran musical theatre star Andrew C. Wadsworth, who doubles as a gruff Mr Darling and a sardonic Hook, while elsewhere in the talented young company Richard James-King, Luka Markus and Joseph Taylor all stand out as names to watch.

If only it didn’t take itself so seriously. A few enthusiastic audience members located some laughs early on, but even they fell silent when it dawned on them that Willmott’s concept leaves little room for humour. The play’s liberal subtext is overloaded with modern-day preachiness – more than enough to give Michael Gove apoplexy – and with so many headlines to blare at us the writer has no time for fun. Despite a couple of splendid set pieces (Captain Hook’s conjuring turn, ‘Sleight of Hand’, and John Darling’s ‘Jungian Dream Analysis’ – a jolly and brilliantly staged second-act opener, albeit one that seems to have been shoe-horned in from another show entirely) the mood rarely rises above the dour. Dialogue is flabby and infested with modernisms (Tinker Bell talks of turds and tossers; soldiers sing of STDs – a term that has only been widely adopted in modern times to clarify the non-explicit coyness of its predecessor, VD) and verbal clichés of the “Not so fast!” variety regularly clog the lumpen text.

While Willmott is unable to capture the lyricism of J. M. Barrie’s Edwardian eloquence, he makes up for it with a score that doffs its cap to a number of contemporary musical theatre composers. As a song-smith the writer-director has yet to find his own voice; the numbers are well crafted but frequently derivative, and one in particular – ‘Bell’s Story’ – sails perilously close to the title song from Andrew Lloyd Webber’s Love Never Dies. A case, some might say, of the biter bit.