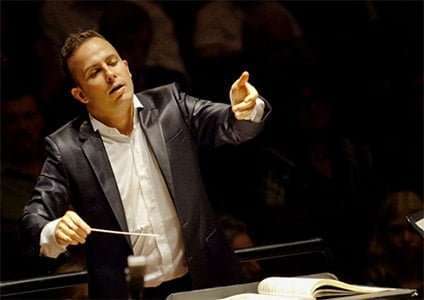 How is it that the most sublime moments can arise from despair? Richard Strauss composed his Metamorphosen during such a period in 1945, as he lamented losses in Germany toward the end of World War Two. The melancholic lines introduced by the lower instruments are gradually taken up and traded among the 23 soloists. It’s an intimate setting – the standing arrangement of Philadelphia Orchestra members (for violinists and violists) gave the feeling of a group gathered at a cocktail party passing around a beautiful melody. The piece, with thematic links to the ‘Eroica’, demands sustained intensity for a half-hour or so. There were stand-out moments in the somewhat uneven performance, including the buildup to a dramatic pause, followed by a gorgeously rendered marcato passage. What seemed to be missing mostly was a weighty suspense that would have kept the audience inextricably glued as the final, tragic note was spelled out. As it was, there were several hesitant attempts at applause before the piece came to its natural end. 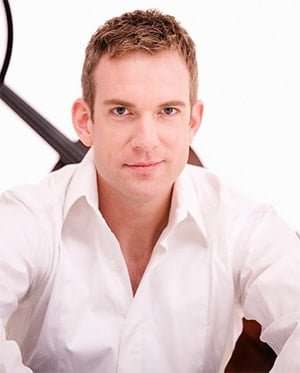 A skiing accident created an opening for the Carnegie Hall debut of Johannes Moser, who stepped in for the injured Truls Mørk to take on Shostakovich’s electrifying First Cello Concerto. A charismatic player with superb intonation and rock-solid tone anywhere on the fingerboard, Moser almost seemed bigger than the sound his 1694 Guarneri is able to produce. The march-like opening with its four-note motto, for instance, needed more bite. Still, Moser dug hard on spiky chords, phrased warmly and lyrically, pizzicatos were ferocious, and he raced around all the strings in thumb position – double stops included – with equal ease and flair. If anything he plays so cleanly and ably that in some places, like the cadenza that is the third movement, you are left wanting more emotional layers. His chemistry with the Orchestra was excellent, from the initial pulsing with bassoons, basses and woodwinds to an ethereal harmonic passage with celesta accompaniment in the second movement Moderato. In the heart-pounding finale, Moser’s raw, rapid fretting played well against the harsh piccolo and thumping timpani, building into a fury of chords high on the fingerboard until he popped right out of his chair.

With the ‘Eroica’, Yannick Nézet-Séguin’s imprint became clear; it’s best described as buoyant. Even through a program of varying and richly layered pieces, the mood of spirited and positive energy felt relatively consistent. Nézet-Séguin’s tempo for Beethoven was notably rapid, which created more momentum for the Symphony that perplexed early critics and audiences for being “horribly long” and “most difficult.” Written in 1803, he originally planned to call it ‘Bonaparte’ but changed his mind when Napoleon crowned himself emperor. The Philadelphia musicians handled the quickened tempo well, and while it created an energetic, more cheery pulse, it also glossed over some of Beethoven’s broad and profound harmonies. The second-movement ‘Funeral March’, especially, lacked gravity and felt ‘tragedy lite’. There remained, however, a deep connection between conductor and musicians that produced spellbinding pauses, landings and suspenseful arpeggios. The sunny atmosphere returned for the final two movements, bringing a terrific energy to the scherzo and lifting hearts all around.