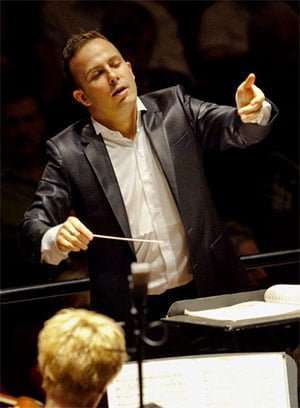 Samuel Barber’s Adagio and the Philadelphia Orchestra – renowned for its lush string sonority – make a perfect match. And, to continue that thought, there seems to be another perfect match between this orchestra and its music director. Conducting without a baton, Yannick Nézet-Séguin molded and shaped the music (originally the slow movement of Barber’s String Quartet) most impressively, from the hushed opening to its wrenching climax, where he called for free bowing, eliciting maximum tone and effect. But almost more shattering was the soft entrance afterwards, the double basses rejoining the upper strings to underpin what can only be described as the ideal ‘sound of comfort’, as if the composer wished to console us after this emotional outburst and lead us to the peaceful conclusion.

Bartók’s infrequently-performed First Violin Concerto seamlessly continued from where the Barber had left off in this well-conceived, composer-alliterative, program. The chosen works have in common pensive, probing moods, spanning a large arc from Barber to Bruckner’s third-movement Adagio, and through a similar style of Romanticism. This concerto is an early work – finished in 1908 – when Bartók was captivated by the violinist Stefi Geyer. Dedicated to her, it remained in her possession, unperformed, until after her 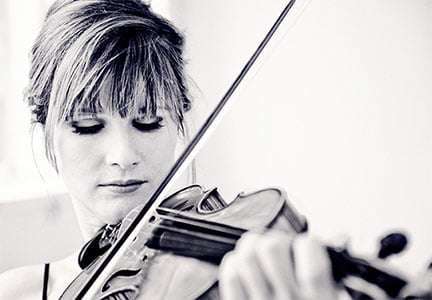 death in 1956. The two-movement work (finally premiered in 1958) opens with the violin, gradually joined by a growing number of string players. One could well imagine Lisa Batiashvili as the embodiment of Bartók’s longing, her playing both wistful and seductive, with a beautiful tone and a plentiful palette of colors, ending the first movement (re-used as the first of Bartók’s Two Portraits, Opus 5) on a breathtaking, floating high note. But she also found the sparkle and wit in the second movement through animated interplay with the orchestra, Nézet-Séguin providing a sensitive accompaniment and following her every inflection and turn of phrase. One can only hope that through performances like these Batiashvili will help to bring this unjustly neglected piece into the standard repertoire.

Klaus Tennstedt once suggested that Bruckner’s great cathedrals of music should simply be allowed to unfold without any personal involvement (but when he allowed himself to get drawn into a performance of the Eighth with the New York Philharmonic, the result was unforgettable). Nézet-Séguin seems to start with the idea that Bruckner’s works first and foremost are music rather than objects of pious reverence, even though the Ninth Symphony is dedicated to “Almighty God”. While he may not have explored every profundity of the score – which would be a rare achievement for a conductor of his age – he led an involving, thoroughly musical and heartfelt performance. Nézet-Séguin is among the minority of conductors who know how to draw a big, rich sound out of an orchestra, rather than trying to beat it into the ensemble. Even in sustained climaxes, it never turned harsh. The powerful, insistent chords of the scherzo were simply thrilling, and the passagework in the trio showed off the virtuosity of the first violins. In the Adagio (Bruckner’s leave-taking from his planned four-movement Symphony) one again sensed the rapport between performers and composition. From the opening melody to the final soft pizzicatos against a sustained brass chord, Nézet-Séguin made the most of the opulent quality of the Philadelphians, eliciting organ-like sonorities that surely would have pleased the devout Bruckner.