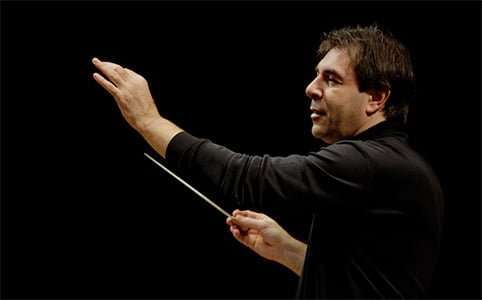 It would be easy to trot out the one about Verdi’s setting of the Requiem text being his greatest opera. (Rather the words fed his sense of theatre for there can be no doubt of the music being of a religious dimension.) There were times in this performance when the Safety Curtain was flung wide open, certainly every time Marie-Nicole Lemieux sang. Her intense connection to every word and note was a drama in itself as she eschewed the score in front of her and seemed to address the Almighty, and not just because her head was often tilted heavenwards. Her vocal colleagues were less consistent and compelling: Krassimira Stoyanova, unmannered and gleaming as she was, sometimes seemed to be delivering no more than a witness statement, although she came into her own in an awe-inspiring ‘Libera me’; Francesco Meli was sweetly lyrical and sensitive, now and then exquisite, if perhaps not wide-ranging enough; and Carlo Colombara, for all his musicality, simply lacked the blacker voice needed (as say Borg, Ghiaurov and Talvela, all now departed souls, could provide), so that “Mors stupebit” (from the ‘Dies irae’) lacked trepidation (and the trumpets off-stage, left and right, could have been placed elsewhere, higher) – maybe its coincidental but Daniele Gatti pushed tempos along when Colombara contributed alone, maybe to compensate for his lack of presence.

Yet Gatti himself was contradictory. Conducting baton-less from memory, sometimes he imposed himself with ‘you must do it this way’ gestures, at other moments he visually seemed content to let the musicians get on with it, although the ear told a different story, for rehearsal had obviously covered the whole. This may have contributed to the feeling that the loudest passages involving the (superbly trained) 170-strong Philharmonia Chorus were merely hall-filling and not rooted in any particular sentiment. Yet the ‘Sanctus’ was light and airy, sung with agility and buoyancy, the joy it should be at a moderate tempo that also gave Gatti and the players all the time needed to trace Verdi’s filigree writing, not least for violins.

However, Gatti’s very deliberate tempo for the opening of the ‘Dies irae’ sapped the music of its wrath, as it did on its two returns, and if the musical articulacy, heavily underlined, and the pounding fateful bass drum strokes were impressive, the lack of excitement here was surprising. Conversely ‘Lux aeterna’, which can seem too much an intermezzo, made an emotional mark that was compelling, and in the succeeding (and final) ‘Libera me’ section the Chorus’s fugal entries were exact and nimbly intoned, the soprano soared, and Gatti expanded the plea for deliverance to really hit the spot and round things off with a powerful plea and then prayerful silence, Gatti’s often expressive hands coming together to illustrate such a mood.

There were though discrepancies in the lengths of gaps between movements; far too long between ‘Requiem aeternam’ and ‘Dies irae’, a break that had too little tension to sustain it and the below-tempo entry that finally hit us only emphasised it. But Gatti was scuppered by external forces at the end of the ‘Dies irae’ from moving on sooner than he patently would have liked while latecomers found their seats; that they were let in while that lengthy sequence was still being sounded was a poor decision, the final bars’ quietness literally trampled underfoot.

Despite these incongruities, to which must be added a lack of truly quiet singing and playing to match the wall of sound created in the most-fortissimo of passages, the response from the Philharmonia Chorus and Orchestra was beyond reproach, the Chorus continuing to benefit from Stefan Bevier’s preparatory skills. Instrumental details were gleefully picked out, not least low trombone notes – and good to have the use of Verdi’s requested raspier cimbasso rather than a heavier substitute tuba – and Keith Bragg’s uninhibited skirling piccolo. One thing beyond any doubt though: Verdi’s Requiem is a great masterpiece and remained so on this occasion in an outing that was definitely moving and thrilling if not always as consistent as Verdi’s fired-up inspiration.