Classical Sourcers will be aware of the impact the Latvian conductor Andris Nelsons has been making in Britain, mainly through his music directorship of the CBSO and also as a frequent guest of the Philharmonia Orchestra. This concert, dedicated to the memory of Wolfgang Sawallisch, who died a week or so ago, aged 89 – he had a long connection with the Philharmonia – brought together two composers who have recently take up much of Nelsons’s time – last year he did a Beethoven cycle with the CBSO and conducted the Royal Opera’s revival of Salome, with Angela Denoke as the lead.

Tod und Verklärung is as far removed from death flat-lining quietly into negation as it’s possible to get, and Nelsons’s direction encouraged Strauss’s heroic idealisation of demise and glorious transfiguration to glow rather than glare. Nelsons kept faith with the narrative in a way that wasn’t in thrall to the music’s grandiloquence. The arrhythmia of the faltering heart at the opening, the growing of the music into the much-delayed main theme, fleeting images of life passing – all coalesced into a sumptuous vision, more a sunrise than a sunset, as the transfigured soul dissipates with lofty tact. The sound swirled, separated and regrouped with luminous virtuosity, the many solos momentarily reeling us in with their intense expressiveness. As one who has a resistance to ‘extreme’ conducting, I remain convinced by Nelsons’s physicality, which enabled a remarkably mobile, cohesive ensemble. 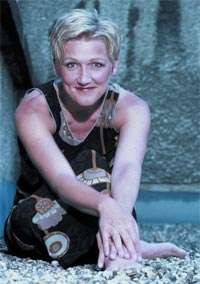 This was even more noticeable in Angela Denoke’s sequence of Strauss’s songs. She often seems the ideal Strauss soprano – her voice has the vital penetrating gleam and effortless phrasing; her lower register is caressingly lovely; and she connects powerfully with the spirit of the music. Compared, say, with Schwarzkopf, words, though clear, aren’t crucial, but her combination of voluptuousness, chastity and amplitude is thrilling. The way she let her voice merge in an out of the serene transparency of the orchestration in Waldseligkeit was late-romantic heaven; in Ruhe, meine Seele, you were never quite sure whether the orchestra was supporting her, or vice versa – either way, the result was ravishing. I thought, if she does Zueignung as an encore, there will be emotional incontinence. She did, and there was – even if she did go a bit sharp, and in spite of a lusty “bravo” doing its best to ruin the impact.

In Beethoven 5, Nelsons pushed his instinct for the music to the hilt. He almost dispensed with the pause mark in the famous opening motto to emphasise the first movement’s rhythmic tautness, and although it seemed short, the sound he drew was massive and athletically precise, with period-style urgency. Instrumental detail rippled through the score like electricity, in the slow movement especially giving the lie to the supposed straightforwardness of classical orchestration, and if there was an accent or a harmonic effect, Nelsons made sure it registered. The way the orchestra fed on its response to itself and the conductor created a virtuous circle, almost a meltdown, of energy and freshness such as you rarely encounter in this well-trodden work. Nelsons’s combination of showmanship and intense musicality had a similar force to that of his mentor Mariss Jansons, and the result was electrifying.