If this was a Gilbert & Sullivan ‘Savoy Opera’ then the alternative title would be “The Tale of the Lost and Found Oboist”.

It was difficult to concentrate on the Wagner due to latecomers trying to find their seats and then continuing to be unsettled (and unsettling) once they did. Add in those who had made it on time talking! Still, while a bit more rehearsal would not have gone amiss, the Prelude to “Die Meistersinger” was strongly projected and purposeful, glowing with honesty, expansive and tender in the ‘love music’, and, coarse brass aside, dignified without being portentous. Some oboe trills failed to surface … but the second oboist had departed a few bars in! 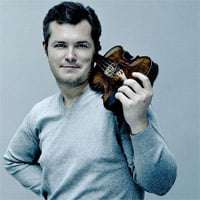 There followed Max Bruch’s ubiquitous Violin Concerto No.1 – great piece but it needs a rest. He wrote two more fiddle concertos, a large-scale, four-movement Serenade and the wonderful Scottish Fantasy (and the latter needs a harpist and a percussionist, who, here, got to go home at 7.45!) – but rarely do we have the chance to hear them ‘in concert’.

This ‘off the peg’ performance was fine, enlivened by Vadim Repin’s virtuosity (a bit muscle-bound at times) and, in the Adagio (with some gentle snoring from a member of the audience!), his rich-toned unindulgent prose.

Above and beyond all this, the concert was a Gala for Cancerkin, marking its 20th-anniversary and in support of “The £1 Million Appeal”. In “Breast Cancer Awareness Month”, one wishes Cancerkin a hugely successful campaign.

While the Bruch could ‘get away’ with no second oboist, the Schumann couldn’t. An extended interval ensued while a replacement was sought; sorry not to name him but he is a familiar face from the Philharmonia’s “Music of Today” concerts. He slotted in perfectly.

For the Schumann – one of the great symphonies in the repertoire – the Philharmonia raised the stakes and the audience concentrated better.

It was an impressive performance, Vladimir Ashkenazy setting an unexpectedly broad tempo for the introduction – Celibidache-like if without the internal references – and if increases in tempo were staggered, there was an underlying logic until the Allegro was reached and elided to seamlessly. This was a performance of clarity, although woodwinds could have been clearer in tuttis and the competing fanfares of trumpets and horns in the recapitulation needed to be more combative, but much was compelling, the scherzo being mercurial and deftly played at a challengingly fast tempo, the two trios very well integrated, the Adagio flowing and exquisitely shaped (the audience held spellbound) and a resolute and cumulatively satisfying finale.