Despite loose connections with nature, the seasons in the first half and maritime associations in the second, this generous programme seemed overcrowded. What could have been a focal point for a world premiere was strangely missing, and with four works of similar length their impact for this listener was reduced. The programme order felt oddly misshapen too, with the romantic sensibility of Frederick Delius coming after the surging energy of Claude Debussy, the only work of the evening to end with unequivocal drama. 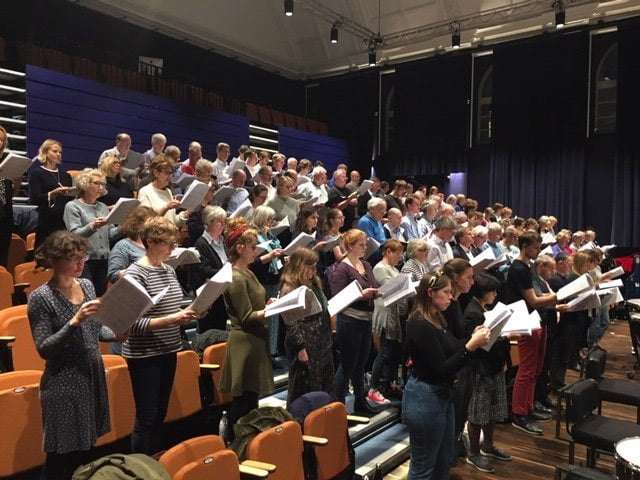 That said, there was much to admire, with Roxanna Panufnik’s recently completed Four Choral Seasons forming a substantial response to English poetry. Whilst departing, in this instance, from her more typical global inspirations, Panufnik’s new work completes a project begun in 1997 with an initial commission from The Royal Academy of Art. This gave rise to ‘Spring’ (Gerard Manley Hopkins) and 11 years later the Waynflete Singers prompted ‘A Summer Wish’ (Christina Rosetti). This year The Bach Choir commissioned ‘Now is the Time for the Burning of the Leaves’ and ‘Blow, blow thou winter wind’ (Lawrence Binyon and William Shakespeare).

Written across a span of over two decades, Four Choral Seasons brought a remarkable stylistic unity; its harmonic conservatism laced with bitonality creating the trademark Panufnik sound. Despite occasional uncertainties, The Bach Choir was fully engaged with the work’s unpredictable vocal contours, each section bringing commendable tone and conviction to exposed passages between more expansive double choir textures. Its imaginative scoring, sensitively balanced by the Philharmonia players, brought colour and pulsing energy (much vibraphone and harp) to the languorous choral lines of the opening ‘season’, while swirling woodwind and animated violins neatly evoked Binyon’s “burning of the leaves”. To winter’s icy blasts Panufnik created a jolly romp, rhythmically agile and melodically grateful, and ‘Spring’ concluded with what felt like hard-earned joy. A work bursting with ideas, it was shaped by Hill’s customary flair, but I missed any sense of cumulative impact and its twenty-five minutes felt overly long.

There followed Ernest Bloch’s vivid symphonic portrait of the biblical King Solomon that is Schelomo. Raphael Wallfisch is an enthusiastic admirer of this Swiss composer and was no less ardent or characterful a soloist in this powerful expressive account that underlined exotic lyricism and sobriety. But for two mighty climaxes the players were restrained collaborators, balance and momentum well-judged throughout. A tad more intimacy at times would have been a bonus, but its outer paragraphs were beautifully etched.

After the interval, Debussy’s sea sketches unfolded with considerable ease, the Philharmonia now demonstrably more at home, delivering an atmospheric and spacious account. Within the general calm plenty of room was made for eloquent woodwind contributions and, in the closing passage, ripe brass and a none-too shy timpanist seemed to bring the swelling waters of the English Channel a little too close for comfort.

Roughly contemporary with La mer is Delius’s 1906 setting of passages from Walt Whitman’s poem Leaves of Grass. Given Sea Drift’s sentimental narrative about loss and longing (symbolised by a pair of seagulls) this performance avoided mawkish expression to focus on a flowing account while still enjoying its languor. Hill drew warmly expressive singing from his excellent chorus and deftly integrated orchestral detail. Against these combined forces baritone soloist Duncan Rock struggled to project, yet there was no doubting his musical intelligence and sincerity of expression, no more so at “O past! O happy life!” closing this highly evocative work.