This concert was Christoph von Dohnányi’s last appearance in the UK as Principal Conductor of the Philharmonia Orchestra (a tenure that will culminate in a tour of the United States, 1-8 May). For all that Dohnányi passes the baton to Esa-Pekka Salonen (from this September), he will continue to work regularly with the Philharmonia as Honorary Conductor for Life, even if the choice of repertoire for forthcoming Royal Festival Hall concerts (at the end of October) is remarkably repetitive! How welcome were Dohnányi’s forays into Adès, Birtwistle and Henze, breaking the stranglehold of a relatively few classics.

However, Dohnányi holds several trump cards; he is not a showman; he knows his scores inside out; he concentrates on old-world values of music-making; and the Philharmonia responds accordingly. Dohnányi is, like Kurt Masur when he returns to the London Philharmonic, a guardian of doing things properly and in a non-sensationalist manner: the music comes first. In a ‘celebrity’-dominated age, such virtues are always welcome. 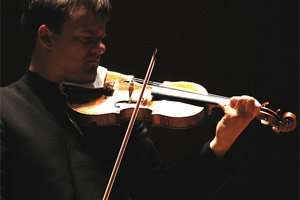 Less satisfying was the programming of this concert. Without an ‘overture’, it was straight into Alban Berg’s Violin Concerto, its beginning far too fragile to begin a concert, listeners’ ears needing to have been ‘warmed’ first with something appropriate. Webern’s Passacaglia (all 10 minutes of it) – ripe Dohnányi repertoire – would have been ideal; furthermore, on the two previous occasions that Dohnányi has conducted Mahler 1 in London (links below), and with a concerto of similar length to Berg’s for violin, a starting-item has indeed been played. Somehow, this performance of Berg’s final work failed to touch the heart. It was, after all, written to commemorate the 18-year-old Manon Gropius (“to the memory of an angel”); yet the emotional distance of this account – while musically attentive and fearless of the score’s complexities – compromised its edge and passion. That said, one would be unable to fault either Frank Peter Zimmermann’s technical address or the playing of the Philharmonia, so lucidly sounded and balanced under Dohnányi’s painstaking direction. Yet, heard in the wake of a remarkable performance by Leila Josefowicz with Oliver Knussen conducting the BBC Symphony Orchestra (link below), this current one was too dispassionate.

Otherwise, the concert hung on Mahler’s First Symphony, a performance to treasure. From the opening ‘dawn chorus’ – violins (antiphonal of course, given the conductor) perfectly hanging their ‘mist’ in the air and off-stage fanfares ideally coming from afar to give a potent sense of foreground and background – to a magnificent closing peroration, this was an account that was constantly persuasive. It’s not difficult to imagine a reading more satirical and voluble than this one, but few are so musically integrated and underpinned by such careful preparation while retaining the music’s freshness and power, the latter not gratuitously plastered-on but generated from within through unerring concern for dynamics (exploiting a wide range, but not micro-managed) and climax – not least saving something for the very end.

Memories of this performance are many – scrupulous balance (brass not rampant), the measured but productive tempos, a sense of awe in the first movement, the ‘heaviness’ of the scherzo, beautifully contrasted with the grace and lilt of the trio, the veiled and sweetly expressive centre of the mock-funeral-march third movement, itself more Impressionistic than the norm, the ‘explosion’ of sound that launched the finale, the raptly beautiful string-playing that offered loving-calm amidst the storm, and a real sense of impending ‘triumph’. Throughout, Dohnányi’s impeccable sense of timing and his faithfulness to Mahler’s (revised) score, and the Philharmonia’s stellar response (not least timpanist John Chimes, guesting from the Symphony Orchestra, who gave an outstanding display of how to mix integration with variegation), made for compelling listening – the expansive close all the more thrilling for seeming so inevitable.