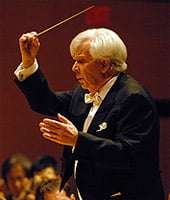 With this concert Christoph von Dohnányi returned to the Philharmonia Orchestra as Honorary Conductor for Life.

The Theme, Brahms’s inspiration – whether by Haydn or not –, was ideally flowing and purposeful and introduced through some lovely woodwind-playing, the first three Variations maintaining a directional pulse before yielding to the Andante of Variation IV, expressive and shaded (and not too heeding of the ‘con moto’ marking). The lively Variation VI was truculent and foot-tapping, the next as ‘graceful’ as Brahms’s direction suggests and the ‘Finale’ a forthright summation.

If lacking somewhat in atmosphere and mystery, Sibelius’s Violin Concerto here enjoyed an unusually cohesive approach and was nonchalantly despatched by Frank Peter Zimmermann yet intensely projected, a wholeness of approach enlivened by an incident-packed and, when appropriate, rough-hewn orchestral response. Zimmermann’s impulsive confidence carried through to the cadenza (rich-toned and vibrant) and such spontaneity also gave the slow movement an eloquence that rose to impassioned heights. If the finale was arguably too fast it was also unforced, rhythmically vital and thrillingly impetuous.

Whether Zimmermann needed to add an encore (further extending a late-starting concert) is a moot point, especially when it was a trite (if fun) set of Variations on “God Save the King”, by Paganini. Still, he played it with true virtuosity (plenty of left-hand pizzicatos!) and even allowed a gentle rebuke to the applause-keen audience that thought he’d finished (“it gets serious now!”) – he carried on distilling more devilish acrobatics!

Dohnányi has conducted the ‘Eroica’ several times in recent Philharmonia Orchestra seasons; this one – which was recorded – may well have been the finest yet, the first movement fleet, incisive and clear-textured (detail revealed anew), the repeat of the exposition made inevitable, the ‘Funeral March’ a lofty vision (if perhaps a little impersonal), a scherzo deftly played and gossamer-like (although the horns of the trio were more fanfaring than hunting) and a finale treated ‘in one’ rather than portentously, the coda a joyous release.

If this wasn’t a revelatory ‘Eroica’ (due to familiarity) it was certainly mightily impressive, dynamic music-making of old-school values (which as a concert performance went virtually without a hitch, but as a CD, presumably for Signum, it will need a couple of patches). However familiar it might all have been, it was also a pleasure to have been there – a great symphony freshly recreated.