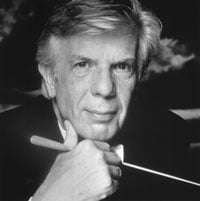 This was the Philharmonia Orchestra at its most solid and satisfying. Solid and satisfying are hardly the most exciting words in today’s sensation-hungry world but they should not be underestimated. To deliver two of the most major works in the repertoire, either of which should ideally form the apex of any programme, with such depth and character is a real achievement. Would that there had been a fuller house.

Judging from the orchestra list, there appears to have been some quite substantial personnel changes since last season – for instance, a cursory comparison of the make-up of the 10-strong cello section in March 2007 and its current make-up reveals only five players in common. Nonetheless the good news is that the essential Philharmonia string sound – warm, cultivated and balanced – remains unaffected.

Yefim Bronfman brought two substantial advantages to Brahms’s concerto, heft and technical assurance. Where other pianists struggle with the more intractable aspects of Brahms’s piano writing, Bronfman is sufficiently in command simply to play, and he has a notably fine left-hand to bring out the gnarled roots which frequently underlie the piano part. For his part Christoph von Dohnányi provided an unfussy, no-nonsense accompaniment, dovetailing seamlessly with his soloist and marred only occasionally by a slight tendency for the soloist to push ahead of the orchestra. Interpretatively the only serious reservation was the sudden upping of tempo in the sempre più agitato with which the second movement scherzo ends; ‘ever more agitated’ can be achieved without resort to a substantial increase in speed. Otherwise there was much to enjoy, especially David Cohen’s fine cello solo in the Andante, which flowed at a slightly faster tempo than usual, and in the well-characterised finale in which Bronfman’s chamber-music credentials were very much to the fore.

Ein Heldenleben is a real test, one from which the Philharmonia emerged with flying colours (I first heard this orchestra play it under Paul Kletzki in 1971 with Hugh Bean leading). Dohnányi’s reading eschewed the usual histrionics. If the opening paragraph may have lacked visceral thrill, much inner detail frequently glossed emerged with great clarity as Dohnányi built patiently towards its powerful climax before the carping critics had their say. Here they sounded a pretty nasty bunch and that the composer didn’t have an easy time shaking them off, whereas in many performances they simply sound like flies waiting to be swatted.

The Philharmonia’s Guest Leader, Radoslaw Szulc, then gave the solo part in a manner fully worthy of his great predecessor: confident, playful and quite beautifully played. Since it is a musical portrait of Strauss’s wife, a very personal opinion is that this is perhaps the one instance the part should be played by a woman, especially when the Philharmonia has such an outstanding lady co-leader. The ‘Battle Scene’ – here taken steadily – packed a mighty punch and was far away from the usual undifferentiated hubbub, thanks to Dohnányi’s evident care with balances. As we entered the final straight, marked sehr ruhig (very peaceful), with its muted strings and harp, there was one of those solos which really make you sit up, from bassoonist Robin O’Neill, a moment of purest frisson. And special mention, too, for the (almost completely) secure horn solos, from Nigel Black, essential in those final deeply moving moments of withdrawal.