Before embarking on a tour of Germany and returning to the Royal Festival Hall (via Leicester, Cardiff and Rouen) on 25 November, the Philharmonia Orchestra and Charles Dutoit unveiled some of its travelling repertoire (London will catch up with Beethoven and Mahler on the 25th).

The suite from Mother Goose – Dutoit not opening his score – was refined, elegant and sensitive, quite old-fashioned in its flexibility, and culminating in a particularly rapt account of ‘Les jardin féerique’, which was blessed with some wonderfully inward string-playing.

A very different (if contemporaneous) ballet score was offered after the interval. A sometimes too-racy, precipitate Rite of Spring, that was a little unkempt at times, yet which often thrilled and was bristling with detail and ‘percussive’ rhythm. Charles Dutoit, recently turned 72, was a demonstrative presence on the podium, driving the music on, if sometimes short-cutting corners and showing impatience with lyrical turns of phrase. If the ‘Introduction’ to Part Two could have been even quieter, there were also some memorable timbre-conscious moments (such as non-vibrato violas) in a performance never less than compelling and often inspiring. 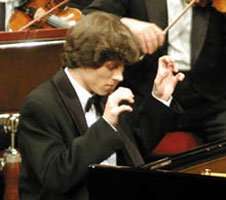 The Polish pianist Rafał Blechacz, 50 years Dutoit’s junior, is already on his second release for Deutsche Grammophon (sonatas by Haydn, Mozart and Beethoven – 477 7453). His wasn’t a particularly ‘native’ performance (coming more into his own in the Mazurka encore) of his countryman’s concerto but he impressed on several counts – the rich and lucid tone produced from the Steinway; his Romantic and malleable approach that never threatened the line of the music; an unexaggerated (not rubato-ridden) traversal that allowed the music to fall into reverie without sounding affected; and there was no lack of unforced fire, either.

The first movement’s majesty was well-judged, allowing ease and impetuosity to seem admirable foils within the grand design; and if the slow movement was a little too spacious (and purple-prose), and the finale too fleet (something more pesante was needed), there was much to admire in Blechacz’s honed and easeful technique always at the service of a mindfully conceived interpretation, one that can only deepen further and, hopefully, conjure some quieter dynamics and be more accommodating of Chopin’s (often-underestimated) orchestral writing, here vividly revealed by the Philharmonia and Dutoit.