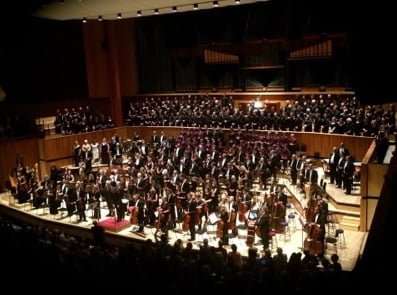 How to measure the success of a Mahler performance in 2014? Even the ‘Symphony of a Thousand’ is ubiquitous these days and only the over-sixties will recall the half-century of semi-neglect which followed its Munich world premiere, paradoxically Mahler’s biggest success in his lifetime. The Royal Festival Hall has never been the obvious place for it and, missing out on Lorin Maazel’s Philharmonia Orchestra account of 2011 (to name but one), the present writer had not attended a Southbank Centre Mahler Eighth since 1991 when Klaus Tennstedt led a notably inspired rendition. Since Esa-Pekka Salonen and the Philharmonia are not making their usual appearance at the BBC Proms in 2014, this concert was genuinely their last London date of the season. There was a palpable sense of gala, every seat sold, even if one doubted whether anything could renew faith in a work often seen as a pièce d’occasion, artistically and musically inferior to Mahler’s other late symphonies. That said, the audience was, gratifyingly, younger than the norm – Salonen’s iPad friendliness must be having some effect – and a fair number will have been coming new to it, without preconceptions.

Just getting the massed ranks of performers anywhere near the stage usually poses problems in this venue, but they were resolved here by scaling everything down. With choral forces numbering barely 200, including the youngsters, there was no overspill into the side stalls. The orchestra being no larger than strictly necessary, the children’s choir could be sat towards the rear of the main stage on raisers. Only the solo singers were at some disadvantage, lined up on opposite sides of the stage facing in towards the orchestra as much as out to the audience. The offstage brass group was in the side stalls while Lucy Crowe’s Mater Gloriosa reached us from the corridor above the Royal Box. Salonen had his sleek-sounding violins unfashionably clumped together. Nothing seemed to be doubled. The sound was focused, hard, bright and modern.

By accident rather than design it was with Mahler’s Third Symphony that Salonen first arrived on the London concert scene yet his Mahler has always been disconcertingly cool, as befits the man dubbed the “Anti-maestro” by Alex Ross (or was it The New Yorker’s editorial staff?) during his Los Angeles tenure. Little has changed. This was a reading more memorable for its spring-cleaned textures than for any great sense of spiritual grandeur. One of its more traditional features was the (unmarked) ritardando into the recapitulation of the ‘Veni, Creator Spiritus’. Tempos were brisk but not contentiously so except perhaps in some of the less-inspired pockets of Part 2 (a setting of the closing scene of Goethe’s Faust) where Salonen pressed on ferociously. The final ‘Chorus Mysticus’ was wonderfully hushed at the start. Elsewhere the attention to detail tended to preclude genuine pianissimos, rubato was rationed and the conductor’s roving eye for modernist colour made the music sound even less German than usual while encouraging characterful solo and sectional work. Part 2 opened with a poco adagio that was more atmospheric interlude than overwrought psychodrama.

The solo singing was variable to excellent. Judith Howarth, a late replacement for Elisabeth Meister, was on fine form and just about nailed her brief, impossibilist contribution to the final build-up. Karen Cargill was her usual reliable self. If Stephen Gadd sounded less comfortable, it was because the role of Pater Profundus ideally needs a bass. The entrance of Robert Dean Smith’s Doctor Marianus (“in the highest, purest region”) was completely drowned out, a rare case of poor balance and/or a consequence of his position, hard-right behind the cellos and double basses.

Salonen slowly and carefully assembled the shattering final climax and was rewarded with a standing ovation. If not a life-changing affair, this was a rendering which impressed by other means. Yes, the lack of hall resonance remained problematic, trapping what should be illimitable within its four walls, but the clarity and projection was quite something, the choirs tremendous.