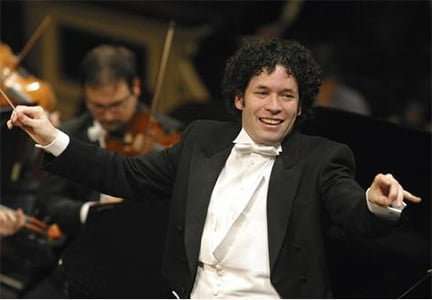 This particular Mahlerian stands in awe of the Seventh Symphony’s whirlwind of ideas and orchestral virtuosity, while never having been moved by it. With its two compellingly original ‘Nachtmusik’ movements (placed second and fourth) seemingly in search of a symphonic context, I’ve given up trying to identify any carefully prepared spiritual or emotional agenda and am content to live for the moment.

Gustavo Dudamel’s approach here was along similar lines. Although now at some distance from the hysteria once guaranteed by his work with the Simón Bolivár Orchestra, the Venezuelan conductor is still hot box-office, which he lived up to in his incandescent conducting. Overall, his galvanising control and spring-loaded beat brought an illusion of logic to the tumult of material, and his heart-on-sleeve exaggeration of the often-violent juxtapositions of mood drew from the music a cartoon-like directness that just doesn’t apply to Mahler’s other symphonies. The horn-calls and cowbells in the first ‘Nachtmusik’ don’t come freighted with the sort of blue-remembered nostalgia you get in the Sixth Symphony but are folded into the fairy-tale tapestry of events.

Surprisingly, since his awareness of contrast was so emphatic, Dudamel missed a trick in the first movement by playing down the weight of the funereal introduction with a decidedly non-dragging tempo, which undermined the sense of dread at its reprise. The euphonium solo (Byron Fulcher) barged in with alpha-male rudeness, and the island of calm at the centre of the movement made its mark in playing of great luminosity.

In ‘Nachtmusik I’, Dudamel gave the Philharmonia Orchestra its head in stretches when he hardly seemed to be conducting, and, throughout, the chamber-like ease of the playing fed into the music’s flow of fantasy. If there is a heart to this work, it’s the one that breaks in the schattenhaft (shadowy) scherzo. Here, Dudamel’s grasp of its process of dissolution was masterly, and the Philharmonia knew just how far to go with the sophisticated, world-weary Viennese games, haunted by spectral solos from viola (Roger Chase) and tuba (Peter Smith). The fantasy really came into its own in the marvellously distracted way with the little serenade that opens ‘Nachtmusik II’, and the guitar and mandolin contributions enhanced its other-worldliness.

The bracing return to reality in the finale made you realise just how Dudamel had gone with the extremes of the three middle movements. The Philharmonia’s execution, distinguished throughout by outstanding solo work, surpassed itself in playing of tireless brilliance and cohesion, whipping the music into a moto perpetuo tornado. Mahler’s reckless exuberance and Dudamel’s driven glamour were here linked in mutual admiration.