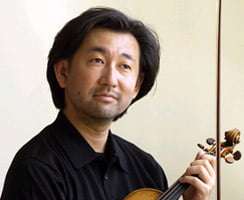 The violinist Joji Hattori was well-received by an almost-full Royal Festival Hall audience for this bread-and-butter pleaser of a concert programme. By the close the results were not so satisfying.

Suite No.1 from Grieg’s incidental music for Ibsen’s “Peer Gynt” contains the memorable ‘Morning Mood’ as well as ‘In the Hall of the Mountain King’. The former was heralded by a wonderfully-colourful dialogue between flute (Kenneth Smith) and oboe (Gordon Hunt), the burgeoning of a new day, with dew glistening in the sunlight, beautifully captured. ‘Åses Death’ (for strings) grew in pathetic (in the true sense of the word) splendour, and was controlled with masterly repose by Hattori. There was, however, too little motion in ‘Anitra’s Dance’ though ‘In the Hall of the Mountain King’ benefited from control and menace, rather than the usual jamboree – details were heightened. 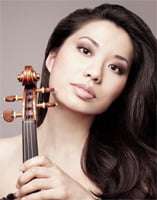 Sarah Chang, in a quite-shocking bright-pink (schoolboys the world over would say it was the colour of phenolphthalein indicator in alkali) dress shaped like a mermaid’s tail danced around the platform during the performance, almost hitting the lead desk of the second violins a few times with her bow. Bruch’s First Violin Concerto, though, was given a lacklustre account – this most-familiar of music (please, let us hear Bruch’s other violin concertos or Scottish Fantasy) sounding ordinary and in need of resuscitation.

Part of the problem lay with Chang’s instrument, which sounded horrible, especially in its low register, grating on the ear and, whilst there is no doubt as to Chang’s technical mastery, there was little heard that was beyond this. Hattori, however, was complicit in making this music devoid of energy. Rigid tempos robbed the finale of its joie de vivre in which the use of rubato would have allowed both soloist and orchestra some expression in the music rather than presenting an account of pedestrian normality.

Beethoven’s Seventh Symphony emerged on the light side. It was ‘heads down’ for the orchestra – some notable contributions from horns, and Andrew Smith’s timpani-playing was well-judged throughout – while Hattori fretted away on the podium. The notes were played but rarely did music shine through. A lack of antiphonal violins hampered matters, with unevenness in balance resulting, and details glossed over. The heroism and joy of the music was sorely lacking, not helped by racing through it at breakneck speed.