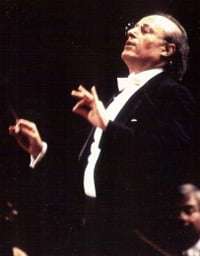 Eliahu Inbal’s Bruckner performances are notable for their wisdom and for the sure hand this conductor brings to their length and complexity. The symphonies unfold naturally, and any problems of structure fade away. In this Mahler Inbal also showed himself to be an amazing orchestral technician, in total command of the carefully wrought detail of Mahler’s orchestration and of the symphony’s huge span. It was an amazing, transcendent performance, and one that satisfied on many levels.

Some of Inbal’s tempos in the first movement may have raised an eyebrow or two, mainly for their heart-on-sleeve exaggeration, but he never lost sight of Mahler’s maestoso indication. This was a funeral march that combined the epic tragedy of Siegfried’s death and the vivid terror of Verdi’s “Requiem”, and told us all we need to know about public heroism and private longing and regret. The headlong descent to the abyss was absolutely electrifying, the concluding lament and farewell full of tenderness and irony, the speed and weight of the final downward flourish perfectly judged (it‘s surprising how many conductors get it wrong and play it too fast), and the concluding soft chord was like a clod of earth thrown down into the grave.

The playing of the Philharmonia Orchestra was nothing short of a revelation, virtuosic, relishing every nuance of this huge score, the players listening to and responding to each other, retreating to let another instrument through, passing the material through the orchestra as though the symphony was a chamber work. It was as much a pleasure to watch as to listen, and the freshness of attack and the alertness of Inbal’s magisterial vision of the work continued through the second movement (with some wonderfully delicate and precise pizzicato playing) and into a biting, wildly assertive sermon to the fishes.

The mezzo-soprano’s perfectly pitched D flat in “Urlicht” was a magical entry and instantly took the music into a parallel universe; and you couldn’t fault Ekaterina Semenchuk’s very precise German enunciation, a soul very much engaged with its fate. Inbal had the measure of the long ascent of the finale, the opening of the graves as vivid as the remote bird calls. The barely audible “shh” of the chorus in their opening “Aufersteh’n” and “Staub” were like puffs of wind lifting the music from mere mortality and toward the light, and the cymbal stroke and harp glissando at “Was entstanden ist” was hair-raising.

Another thing that clinched this ‘Resurrection’ was the stage management. Inbal conducted it without a break (even though a break at this point was sanctioned by Mahler), so there was no going off to collect the soloists after the first movement (the disappearance of Mariss Jansons for more than five minutes in his Barbican Hall performance last December was completely disruptive) and reappearing to a listless ripple of applause; and it seemed right that they should be placed with the excellent chorus, and emerge, as soprano Caroline Stein did to stunning effect, out of the choral mass.

Moreover, the chorus stood up at the great fortissimo before the antiphonal brass passages and remained standing. I know this is just presentation, but I don’t see how the chorus can contemplate and sing about their rebirth from a sitting position. I’ve been to performances where the chorus has sat throughout and felt very short-changed. Thank heavens the Royal Festival Hall organ has edged nearer to its restoration; as it is at the moment it would be better off using an electronic instrument. Finally, this towering performance was a reminder of how transformed the Hall’s acoustic now is, able to contain a huge volume without distortion as well as project the quietest of sounds.