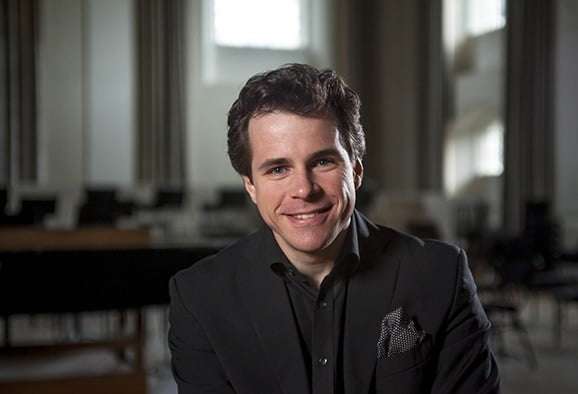 Mahler’s Fifth Symphony can be a difficult piece to bring off, often seeming disjointed. Here it emerged resplendent but above all quite unusually coherent, a trajectory from darkness to light, from the shadows of its opening funeral march to the sunlit uplands of the Finale. The Philharmonia Orchestra was at its considerable best, with a notably rich string sound. Jakub Hrůša is Chief Conductor of the Bamberg Symphony as well as Permanent Guest Conductor of the Czech Philharmonic, and he has a natural affinity with Mahler’s music, the Fifth’s five movements falling into three parts. Hrůša rightly linked the two opening movements.

What was really noticeable besides the many excellent individual contributions (secure trumpet from Jason Evans at the start and the sensitive horn of Timothy Ellis in the pivotal Scherzo) was the absolute sure-footedness with which Hrůša negotiated the music’s contrasting sections. Sometimes this was a matter of tempo, but it was also very much a matter of characterisation, such as the extreme vehemence with which the double basses attacked the second movement at its outset. Elsewhere some of the really quiet playing was utterly magical.

The fourth-movement Adagietto is frequently treated as though it were a forerunner of the Finale from the Ninth Symphony carrying the weight of the World’s sorrows. Here it was gentle, dignified and unaffected, its full impact rightly reserved for its cathartic closing bars, and the final movement then achieved the difficult feat of being at once playful, powerful (where needed) and culminating in a blaze of unfettered joy.

Unfortunately Piotr Anderszewski’s account of Beethoven’s C-major Piano Concerto was far less convincing. Anderszewski is a fine pianist – his encore, by Janáček, was absolutely hypnotic – but in the Beethoven he and Hrůša were singing from different hymn sheets. The Philharmonia produced the most finely honed of opening ritornellos, breathing the music into life effortlessly, only for Anderszewski’s first entry, prosaic and over-forceful, to dispel the enchantment. There was wilfulness to his playing – individual notes pecked at, every sf marking seized on – which became very wearing.

At this stage of his pianistic career Beethoven was undoubtedly an eccentric performer, an angry young man in a hurry, and quite possibly did things with his own music which we might jib at, but what was strangely unsettling about this performance was the disjunction between soloist and orchestra with very little sense of interaction. Least unsatisfactory was the Largo where Anderszewski’s matter-of-factness did not get in the way, but in the Finale, taken at speed and with plenty of vim, every off-beat marking was underlined in triplicate.