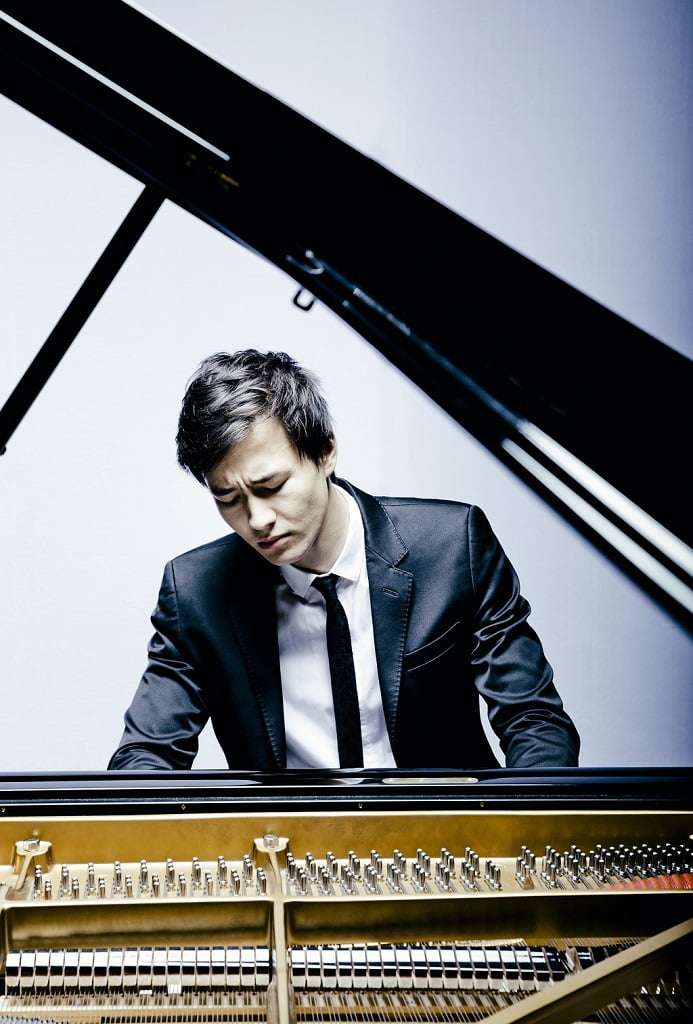 A remarkably successful concert in almost every respect. The opening piece, Richard Rodney Bennett’s Celebration (1991, for the Maryland Symphony Orchestra) was stunningly well played. John Wilson is engaged in recording for Chandos a series of Bennett’s orchestral works (links below), and whose command of this by no means easily-playable score was total. Celebration is an exceptionally brilliant concerto for orchestra, or perhaps a Twenty-Something Person’s Guide. It is magnificently written, subtle yet immediate – one aspect of the subtlety being Bennett’s amazing working of three strands of rhythmic material at once – each strand crystal clear, yet threaded admirably with the strands of the other material: so clever, so breathtakingly musical, yet never done with the ‘look how clever I am’ approach that other, less gifted, less artistically successful, composers display. I would not go so far as to claim this was Bennett showing Elliott Carter how to write differing music to be played at the same time, with greater refinement and certainly greater clarity, but such is Bennett’s total mastery that one was lost in admiration – especially in such an expressive and dynamic account as this.

George Gershwin’s Piano Concerto remains, after more than ninety years, a wholly unique and original masterpiece, which almost invariably comes up as fresh as paint – as it did on this occasion, although one felt Wilson’s initial tempo was a shade too fast for 4/4 crotchet = 138, which Gershwin himself marked on his manuscript; not that the Philharmonia gabbled the opening ritornellos, but the rising bassoon line, and the descending first-violin line, could have been unclear. This first movement remains the first and only wholly successful symphonic Charleston, and with Louis Schwizgebel a clean-fingered and hugely stylish soloist, it was wholly successful – as indeed, were the Adagio and Allegro agitato second and final movements, the former greatly distinguished by trumpeter’s Alistair Mackie’s wonderfully moody contribution to the “deserted night-club” atmosphere. As an encore, Schwizgebel offered Schulhoff’s ‘Chanson’ Jazz Etude.

William Walton’s First Symphony ended the programme in a reading of stunning power and expression. Time was when this undying masterpiece was heard relatively frequently, but it’s a relative rarity these days. Nonetheless, this performance was – just one or two points excepted – the finest and most impressive I have heard live in almost fifty years: since Previn and the LSO in their heyday. In their thrilling account of the Scherzo, Wilson and the Philharmonia delivered the greatest performance of this movement I have ever heard (for the record, although I knew the work from Hamilton Harty’s 78s and Walton’s own mono LP, the first time I heard it live was at the Royal Festival Hall sixty-three years ago, with the composer conducting the RPO – I’ve never forgotten that performance).

There are one or two points where I demur from Wilson: the dramatic comma in the first movement, so perfectly judged by Walton, and Previn with the LSO, was cut just too short here, but the Philharmonia’s first-violins entry after the initial establishment of the first movement tonic – that high D-flat – was breathtaking. The second point concerns Wilson’s tempo for the first Allegro after the Finale’s preludial music: this was too fast for details to be clearly understood, which meant, too, that the ensuing fugato tended to be less sturdy a building passage as the work inexorably drives to its conclusion – though the violas were exceptional in their clarity – the true scherzando lightening of mood comes soon after, in the tricky 3/8 section. But the great orchestral shouts and the three unison B-flats which throw out their challenges to end the Symphony, were simply magnificent.

Although one may demur over a couple of points, what cannot be denied was Wilson’s understanding and grasp of this amazing music, which can still, in the right hands – as here – pack as powerful a punch as it ever did. I don’t think I shall ever forget this Scherzo – nor would I wish to. This is what going to concerts should be about.