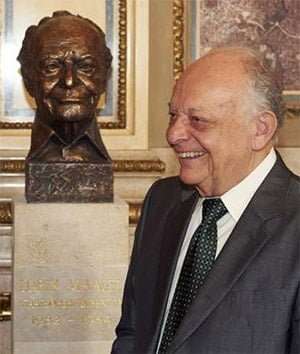 Not many conductors have the chance to come back and perform the same two works with the same orchestra half a century after having first recorded them together but, checking my old and treasured vinyl collection, I see that Lorin Maazel recorded both Till Eulenspiegel and Pictures at an Exhibition with the Philharmonia Orchestra in 1963 (Walter Legge producing the latter). Lest this make Maazel feel his age, now 84, I had heard him at the Edinburgh Festival several years previously. On occasion, Maazel’s exceptional facility in getting an orchestra to do exactly what he wants can be a negative. One admires but is not always persuaded musically. However, in the ‘right’ music Maazel’s unquestionable command and control pays rich dividends; Till Eulenspiegel and Ravel’s orchestration of Pictures at an Exhibition are undoubtedly the ‘right’ music.

In this matinee concert, the Richard Strauss opened and closed in a dream, its ‘once upon a time’ quality much in evidence which was entirely appropriate, and was blessed with characterful horn solos from Katy Woolley. In between, despite the Philharmonia’s assured and polished playing – notably an excellent violin solo from Zsolt-Tihamér Visontay – the music was msde so expansive as to belie Till’s ‘Merry Pranks’. Carlos Kleiber once described the essential Strauss performance quality as “not dragging the tempo”. Timings can be misleading but at around 18 minutes here, Strauss’s prankster was hardly light on his feet. His eventual hanging though was a moment of high drama, rammed home to maximum effect. 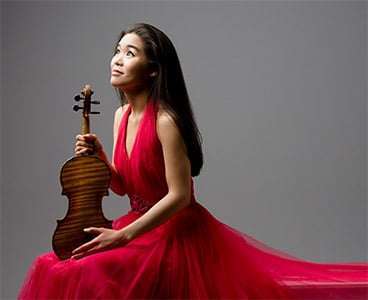 Esther Yoo first came to international attention when she won the Sibelius Violin Competition in 2010 at the age of 16. This concert marked her London concerto debut (although she toured China and Korea with the Philharmonia in 2012). Mozart’s G major Violin Concerto received an accomplished but not especially distinctive performance marred by wildly inappropriately long first- and slow-movement cadenzas by Sam Franko. The Adagio, a heavenly cantilena, was nudged hither and thither and the finale came across as unremittingly earnest rather than a joyous dialogue between soloist and orchestra. Inevitably there was an encore, again overlong, Kreisler’s Recitativo and Scherzo, secure enough but lacking easy charm.

With Pictures at an Exhibition we were back in top gear. It is worth remembering that Maazel is one of the great Ravel interpreters (his recordings of the composer’s two operas remain unsurpassed) and that the orchestral Pictures at an Exhibition is as much Ravel’s as it is Mussorgsky’s. Maazel has an ability to tease out detail and characterise the individual moment. ‘The Old Castle’ was notable not just for the saxophone solo but also for the other woodwind contributions such as Jill Crowther’s cor anglais and its perfectly graduated decrescendo at the close. Similarly, the vicious portrait of the two Polish Jews, Goldberg (rich) and Schmuyle (poor), was superbly caught by Jason Evans’s whingeing trumpet (Schmuyle) and in the weighty attack of the lower strings. The chattering housewives of Limoges could have repaid a slightly lighter touch, but the final tableau, ‘The Hut on Fowl’s Legs’ leading into ‘The Great Gate of Kiev’ packed a visceral punch.

Maazel had seated the orchestra without risers. This produced a quite marked improvement in string sound and, with woodwinds and brass now embedded on the same level, it avoided some of the distortions which have plagued the Festival Hall acoustic. It is such a simple solution one wonders why nobody has tried it before and why it should not now become the norm.