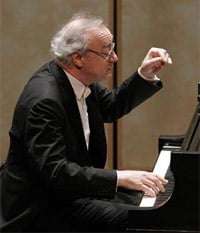 It may be a cliché, but is no less true for that: great musicians, like vintage wines, improve with age. This concert featured two of the world’s greatest living musicians at the top of their game, their maturity bringing a wealth of illuminating insight, supreme authority and – above all – sheer love of music to overwhelmingly joyous performances.

The only note of sadness was that the occasion marked the final UK appearance of one of these men: though a few years younger than Charles Mackerras (who is nearly 83), this really was the “last chance to see” Alfred Brendel in the UK, the pianist having decided to retire from the concert platform at the end of this year (his final appearances are in Vienna). Yet there was nothing valedictory about his exuberant performance of Mozart’s youthful E flat concerto (arguably the composer’s first masterpiece).

Marked by astonishing technical mastery and mesmerising fluid fingerwork that would put many a younger player to shame, Brendel’s sparkling accounts of the outer movements belied his years; while a rich lifetime’s experience radiated from the dark central Andantino with tangible poignancy. Most exquisite was the minuet that Mozart cheekily inserts into the otherwise hectic finale, rendered with peerless grace, poise and exceptional sensitivity.

A standing ovation, acknowledging not just the performance but a blessed career, was answered with an intimate account of one of Brendel’s other special passions: Schubert – the G flat Impromptu from the D899 set. Time seemed to stand still as the spellbindingly silken playing and rare expressive depth reminded again of Brendel’s greatest strength: his artless ability to ‘interpret’ without imposing. With Brendel it always seems as though we are hearing the music directly from the mind of the composer – a rare gift that will be much missed. 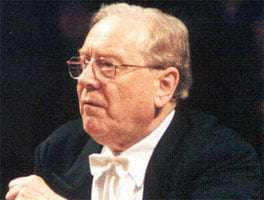 The pared-down Philharmonia Orchestra provided taut, responsive accompaniment in the concerto, having begun the concert with a commanding rendition of Haydn’s last symphony. A crisply articulated account, with lithe and invigorating outer movements and a deliciously swaggering Minuet, Mackerras took nothing at face-value, bringing out a wealth of inner nuances. This reaped the greatest dividends in the Andante, which grows from one of Haydn’s most characteristically unassuming melodies to moments of intense complexity and drama.

Restored to full strength after the interval, the richly sonorous Philharmonia strings shone in the infectious sunny Eighth Symphony of Dvořák – another composer with whom Mackerras has a special connection. The work’s winning contrast of open-prairie breeziness and “Rusalka”-like impassioned tragedy was especially concentrated in the second movement, while graceful string portamento gave even more character to the wistfully lilting scherzo. As with most of Dvořák’s symphonic works, the tension drops during the finale, frenetically whipped up again by a barnstorming coda – perfectly paced by Mackerras for maximum excitement.

Showing absolutely no sign of flagging, Mackerras was in his element. With music-making as compelling as this, let’s hope that we can continue to enjoy his concert appearances for many years to come.