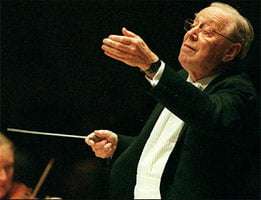 Financial empires may crumble but the presence of Sir Charles Mackerras on the podium is a source of reassurance whatever the calamity. His fruitfulrelationship with the Philharmonia Orchestra here with threewell-tried and yet enduring masterpieces benefited from being sojuxtaposed.

Mozart and Dvořák are composers in which Mackerras has long excelled: nodoubt he would, too, in Bruch were there more of a chance to hear thiscomposer’s overly neglected output. As it was, the First Violin Concertogained considerably from such attention to and shaping of detail –confirming that Bruch’s fine if relatively unadventurous orchestration goeshand in hand with his understanding of the violin’s potential. A potentialsuch as Sergey Khachatryan admittedly took a little time to get to gripswith here – the preludial first movement just a little staid inconception, though reprieved by Mackerras’s incisive handling of the climactic tutti followed by a breathless transition to the major. 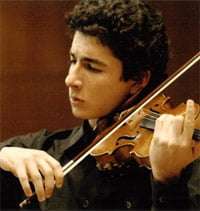 There was little to criticise in the remaining two movements: Khachatryan’sfine-spun but intense vibrato was admirably deployed in a melting account ofthe Adagio (one wonders how many attend such a concert just to hear this),while the finale lacked nothing in verve or eloquence. A reading thatcertainly reaffirmed the young violinist’s stature, yet his instinctivegesture to Mackerras as soon as the performance was over left no doubt thatKhachatryan himself saw this as a joint enterprise.

The first half had opened with a spirited account of Mozart’s late E flatsymphony – the first of his 1788 triptych over which much speculation hasbeen expounded, though Mackerras was typically intent on blowing awaycobwebs with a coursing account of the first movement’s slow introduction(its harmonic dissonance tellingly pointed), before an Allegro that lackednothing in incisiveness. The Andante is one of Mozart’s mostthought-provoking in its alternation between very different kinds of pathos,both much in evidence here, while the Minuet is among his most robust andengaging – yet complemented by a trio whose clarinet writing is artless evenby Mozart’s standards. Come the finale and Mackerras rightly took the secondhalf repeat (as he did all of those beforehand), so underlining the relative’half-close’ of this endlessly resourceful movement. ‘Authentic’ trumpets wereemployed, their timbre cutting through the lean but never anaemic texturethat the conductor appositely favours.

That Mackerras is thought less of a Dvořák than a Janáček advocate issimply owing to the fact that the latter’s operas needed his advocacy muchmore than the former’s major orchestral works (though not, of course, Dvořák’s still too little known output as a whole). His account of theSeventhSymphony left no doubt as to his identity with this consummately-workedscore – if the Bohemian composer indeed intended it as a head-on challengeto Brahms, he succeeded in no uncertain terms.

The first movement had tenderness as well as drama – Mackerras steering intothe reprise with real conviction, then marginally holding back in the finalclimax so that the quiet closing pages seemed more than usually fateful. Theslow movement can be difficult to pace without either losing sight of itsvulnerability or underplaying its rhetoric, but not here, while the scherzowas the more bracing for its rhythmic keenness – Mackerras mindful not tosacrifice this by too headlong a tempo. He also ensured the finale builtsteadily but inexorably to its apotheosis: there was no false emoting here,only a pervasive defiance as the work headed to its close poised on aknife-edge of major and minor.

That the applause was considerable was to be expected; as was thePhilharmonia Orchestra – who rarely played below par all evening – giving the floor toMackerras. Now in his 83rd year, he is the most unassuming of greatconductors, but the sheer consistency and insight of his performancesremains undimmed.