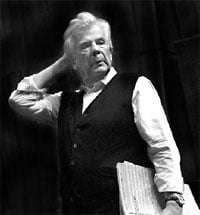 The Philharmonia Orchestra opened its 2007-08 Season with a generous coupling of Henze and Beethoven and festooned the Royal Festival Hall (if not the auditorium itself) with red balloons and arranged a post-concert cabaret.

In 1966, Christoph von Dohnányi conducted the premiere (at the Salzburg Festival) of Hans Werner Henze’s opera “The Bassarids”. In 2004 Henze prepared Adagio, Fuge und Mänadentanz from the ‘third movement’ of the opera (which gives an idea of its symphonic construction) for Dohnányi’s NDR Symphony Orchestra in Hamburg. The premiere was in September 2005 followed in April 2006 by the US first performance, Dohnányi and the Boston Symphony.

No claim being made for a UK premiere – but investigation reveals that this was a UK first – Henze’s sequence is no off-cut from the opera but a substantial (nearly 30-minute) work for large (even extravagant) orchestra that includes two pianos, two tubas, alto saxophone and bass trumpet. It made a vibrant start to the season – more such please – that introduced lyrically rapturous music pregnant with atmosphere, very carefully coloured, then spectral and fantastical invention, full of imagery (a combination of sax and plucked (guitar-like) harps suggested, briefly, the appearance of a troubadour). And amidst the evocative, often-enchanted ambience, the more hard-edged passages was a perfect foil, not least the aggressive juggernauting dance-music that itself was contrasted by some remarkably rapt writing, exquisitely played, before the peace was finally shattered.

This absorbing music was given a painstakingly prepared performance that would have made a valuable addition to the Philharmonia Orchestra’s download facility. Alas, though, no microphones were present.

The Beethoven was equally compelling, a performance that was always ‘on the up’ – and was crowned by an exhilarating finale. Again, the playing revealed considerable preparation and a mastery of dynamics and climactic curves. Dohnányi’s conception was Classical (only let down by his not observing the so-important second repeat in the scherzo) and complemented by near-perfect balance and beguiling detail (antiphonal violins a boon) to sustain the whole work, forever on the march to ‘Joy’. The first movement can be – maybe should be – more volcanic than here, but its outcome was never doubted; the scherzo chatted merrily (the trio warmly expressed); and the Adagio was serene and very expressive, kept on the move (without compromising the Andante contrasts) while avoiding ‘authentic’ haste.

The finale had been set up – although Dohnányi missed a trick by not going straight into it – and was blessed with four excellent soloists and a large (combined) choir that sung with discipline and sensitivity and was always attentive the finer points of balance with the orchestra. The ‘Ode to Joy’ theme was introduced without ceremony – refreshing – and the symphony spiralled to an uplifting conclusion, all links in the finale’s chain belonging and bonding.