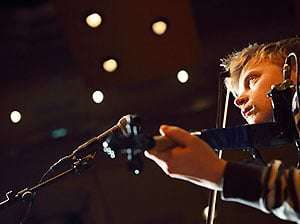 Well done to the Philharmonia Orchestra for putting this concert on and for getting a good turn-out. Some of the all-weather Mahler and Shostakovich nutters – present no matter how often their music is programmed – probably stayed away and those who would have made it along for Arnold Bax or Lennox Berkeley may have felt Britten and Vaughan Williams as too English-mainstream and Thomas Adès a thorn too far. Never mind that Ralph Vaughan Williams is a great composer and his Sixth Symphony is an undisputed masterpiece, all too rarely played. Britten’s stuff dragged them in last year – however overdone, even for his centenary – with Peter Grimes sailing many a sea back then (and riding the waves even now with a revival current at ENO), so that the ‘Interludes’, however evocative and powerful, here felt like a voyage too far. That said Nicholas Collon, a young man with a stellar future, led an impressive account in terms of restless, tense expression (‘Dawn’) – although the violins were a little tentative and thin-sounding – then a bracing ‘Sunday Morning’ was followed by a ‘Moonlight’ that left in no doubt that dangers lie fathoms-deep and all was swallowed by a whipped-up ‘Storm’ that could have been timpani-dominated but was in fact well balanced while also throwing caution to the wind.

Thomas Adès composed his ‘Concentric Paths’ Violin Concerto for Anthony Marwood, who gave the premiere at the BBC Proms in 2005, and he has since recorded it. Pekka Kuusisto played it in London two years ago with the Britten Sinfonia, and reprised it here with relish. Playing for just under 20 minutes, ‘Concentric Paths’ may not be the ubiquitous Bruch or Mendelssohn concertos but it is accessible and ingenious, a sort of ‘new simplicity’ in Adès’s output back then. With the outer movements each lasting roughly five minutes, and the middle one playing for their combined length, there is a nice symmetry to this work, scored for a large chamber orchestra, music of energy, drama and emotional charge, even of romance, the middle movement suggesting itself as a ‘rite of passage’ and the finale, beginning with a violin melody threaded through motivated figuration in the orchestra, proving just a little skittish on the way to a lack-of-finality final chord. Kuusisto played with technical brilliance and much character, the Philharmonia and Collon irresistible colleagues. Kuusisto returned for a witty spoken introduction to his encore, some short-bow, ‘pure’-toned J. S. Bach, a slow movement moved along apace, gently dancing, easeful and extemporised … very convincing. 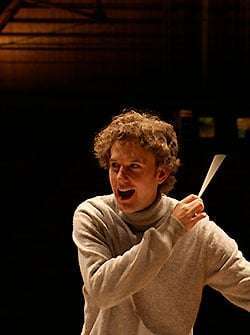 Collon is a man with his own ideas, a lucid technique and an infectious enthusiasm. He and the Philharmonia tore into Vaughan Williams’s war-swept Sixth Symphony (completed in 1947), music very easy to hear as reflecting conflict, something denied by the composer. Collon drove the music a little too much though, more edge and digging-in was needed, difficult at this speed, and a fuller sound would have helped too; the clarity was admirable, but greater sear was required, so too a deeper response to the spacious (“Family at War”) tune that finally emerges at the first movement’s close, Collon then keeping the second one on a related line, grinding the music to an insistent and formidable climax. With the demonic scherzo, Collon once again went for speed – exciting in itself – but raw emotions were smoothed-over in the melee and the trio’s bluesy, nightclub saxophone and sleazy jazz rhythms went for little (Boult, who conducted the Symphony’s premiere, and Handley – the usual suspects, one might say – knew the secret of a more-measured approach to this music). In the visionary finale, marked pianissimo throughout – of nuclear wastelands, just-post-Hiroshima in terms of the work’s writing, although the composer cited Prospero’s words about dreams and sleep – Collon and the Philharmonia achieved a remarkable chilly emptiness, the sound bleached, the expression fragile, instruments pared down (to a string quartet at one point), fading away while still asking questions that receive no answers … and brought off mesmerically.