This was one of those popular ‘old-fashioned’ Saturday evenings. Infinitely musical, resolutely undemonstrative, Paavo Järvi steered proceedings in a cultured way, score before him, clear and direct in his intentions. If there was a trait, it was his insistence on pauses and rests, allowing the music to breathe with eloquence. At the end of the Tchaikovsky, letting death and B-minor settle, he deliberated the aftermath long, to the uncertainty of a packed audience impatient to cheer and applaud. Fielding a largely youthful team, carrying no dead wood, the Philharmonia (antiphonal violins, led by Benjamin Marquise Gilmore, concertmaster designate) rose splendidly to the occasion, Järvi’s balancing and ‘air’ encouraging full, rich, glowing strings, a brass section exemplary in individuality and chording (Tchaikovsky again), and a woodwind line-up riding the tuttis with incisive, soloistic clarity. Repertory like this can all too easily fracture into the routine and ordinary. What we got was involvement and freshness.

Admirers and collectors will need no reminding of the authority of Järvi’s videoed Beethoven cycle with the Deutsche Kammerphilharmonie Bremen. Pulsating with tension, his Egmont ploughed the drama and rose to glory. The precision attack was to be relished, the piccolo at the end piercingly clear (Keith Bragg), the use of hard-stick ‘period’ kettledrums, a recurrent trend these days, underpinning the action with not a little fire and gallantry (Antoine Siguré). (Like modern pianos, modern timpani are a different breed of instrument, at the expense of their original rattling physicality.)

London-based Viktoria Mullova is ever-youthful. Watching her, listening to the unfailing brilliance and power of her playing, she’s still that slim Moscow girl of the early-eighties, winning the Sibelius and Tchaikovsky competitions, defecting with her Georgian lover to the West, her story “the stuff of spy movies”. Her Sibelius Concerto was arresting, its accuracy and intonation compelling (octaves and harmonics not least). This was a silk-and-cream performance, the first movement emphasising its cadenzas, the Adagio like an old tale, each slur, accent and tenuto, each rhythmic grouping and dynamic curve, carrying feeling and meaning. “The people [of the Baltic] might seem cold and cool”, Andrew Mellor reports her as saying, “but underneath they are very, very emotional, they cry easily.” 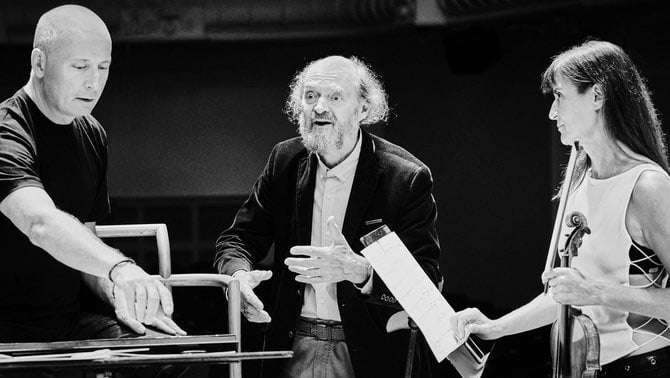 For an encore she offered Arvo Pärt’s 2007 Passacaglia written for Gidon Kremer’s sixtieth birthday – a piece journeying from ghostly, metrically/temporally metamorphosised echoes of the Beethoven Concerto (the repeated open string A/E fifths) to a brief, unexpectedly Hebraic, close. This was refined, the final cadenza a teasing mixture of arco and pizzicato (Pärt leaves options open). Maybe the Philharmonia was a touch uneasy (and I would have preferred more tangibly audible viola and cello slurring at the start), but the last bar was unadulterated magic, a hushed pppp A-major chord that hummed from nowhere into nothing (compared with her recent Estonian National Symphony recording which has Järvi relatively present at this point). Classy.

Järvi has never been a man given to histrionics or showmanship: he’s far closer to his father, Neeme, than his younger brother, Kristjan. In his Frankfurt days, his Tchaikovsky was more in the Haitink vein than anything Russian or American, overdrive mattering less than a quality pulse and honesty to the page. This ‘Pathétique’ emphasised beauty of tone and ensemble. Carlos Ferreria led the clarinets with distinction, likewise Robin O’Neill the bassoons. The brass, from stridency to appeasement, found a filmic dimension, impeccably in accord. Cellos and basses plumbed Jovian gravity, the codas of the outer movements – the descending major scales of one, the life-ebbing minor throb of the other – up there with the finest.

In an effort to stem audience intervention, prompted perhaps by the autograph/published pause signs at the end of each movement, Järvi went for a segue reading, effectively turning the work into a fantasia in four tableaux, further subdivided. It made for a powerful, theatrical re-focussing of familiar landmarks, their unconventionality primed in provocative, almost operatic light. “The best thing I have composed”, believed Tchaikovsky – and that’s what it felt like.