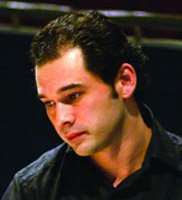 The early-evening “Music of Today” presentation was then tellingly contrasted with a very different example of French music, the Suite (1908/9) of pieces (re-orchestrated) that Fauré chose from his incidental score composed in 1898 for a London production of Maurice Maeterlinck’s “Pelléas et Mélisande”. (Interesting that this relatively rare collection features again in the Philharmonia Orchestra’s forthcoming season; Lorin Maazel conducts it on 2 April.) Tugan Sokhiev caught the tender and rapt aspects of the ‘Prélude’ – vocalising to it at times – but it was also too intense and over-lit. ‘Fileuse’ was spun on a delicate web of sound, however, and Paul Edmund-Davies’s flute was plaintively aired in ‘Sicilienne’, with ‘La mort de Mélisande’ both austere and infinitely sad – somehow, though, the pieces, for all the sensitivity displayed, were not quite elusive enough. 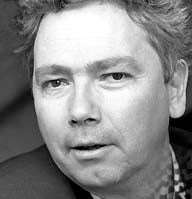 Earlier on, in the penultimate “Music of Today” of the current season, Philippe Leroux’s “Voi(Rex)” was slightly handicapped by the intended information-sheet not arriving, although Julian Anderson (MOT’s artistic director) and the composer introduced the work well enough. Composed in 2002 at IRCAM (Paris), Leroux has set poetry by Lin Delpierre for live and recorded soprano and six players (piano, percussion, violin, cello, flute/piccolo and various clarinets). The poet and composer also contribute to the soundtrack and the work further requires a computer, a mixing desk and numerous loudspeakers, the latter encircling the audience.

Leroux is identified with (but not connected to) the Spectral school. Over its 22-minute course, “Voi(Rex)” – the title open to multi-sensorial interpretation, it seems – is luminous in sound and quite theatrical, the singer – here the super-virtuoso Donatienne Michel-Dansac – required to find numerous effects and pitches, some heard through the speakers (courtesy of Sound Intermedia) with the instruments definable as themselves but also interweaved into the often-busy textures and lively discourse. Perhaps true to his French lineage, Leroux’s creation is as refined as it is precise. It also has something of the cabaret about it; thus its madcap aspects began to suggest György Ligeti and how his long-wished-for but not fulfilled project to set “Alice in Wonderland” might have materialised. Pascal Rophé ensured a very-together performance of what turned out to be a very entertaining piece of work. 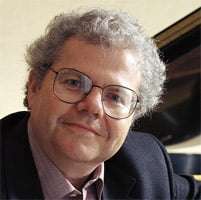 Returning to the main concert, the accompaniment offered to Emanuel Ax only went as far as it needed to. One would single out Robin O’Neill’s splendid contribution on bassoon and also Andrew Smith’s deft touches on timpani, but the orchestral introduction was harried and rather scrappy, the marked Maestoso more an Allegro brillante. Emanuel Ax is a seasoned performer of Chopin’s concertos (he has recorded both twice – with the rather different soundworlds of the Philadelphia Orchestra and Eugene Ormandy, then the Orchestra of the Age of Enlightenment and Charles Mackerras). This performance had the air of ‘middle-ground’ about it, Ax interjecting some breathing space into the phrases, but tending more to muscle than lightness and playfulness, but this would come later in a Larghetto that refused indulgence to integrate stormier moments within the nocturne-like atmosphere (some of Ax’s treble notes had the purity of raindrops) and was joyfully insouciant in the finale, which, with moderate tempos and unforced cascades, proved utterly beguiling.

In time-honoured tradition, the best was saved until last: a magnificent performance of Prokofiev 5 that accounted fully for its epic and brooding opening movement, fizzing scherzo, shadowy-contemplative slow movement and jocose if eventually mechanistic finale. Sokhiev had the symphony’s every nook and cranny at his command, the music itself given with poise, articulacy, energy and power – get that right and the ‘indomitable human spirit’ narrative looks after itself, especially with the Philharmonia at its very best and playing with incision, character and commitment. Not only did Sokhiev have the measure of the piece as a whole, he also ensured that the loudest climaxes stayed within tolerable bounds (brass and percussion contributing fully without displacing well-made balances); indeed, such was Sokhiev’s long-view that it was the helter-skelter closing bars that sounded the alarm – and with real edge. It’s a shame that this performance was not recorded for it would have been a gift for the Philharmonia’s download facility.