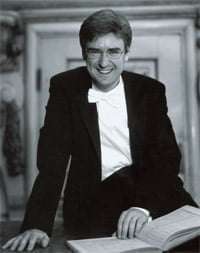 The Danish conductor Thomas Dausgaard, stepping in for Kurt Masur who broke a hip in a fall a few weeks ago, is quite an ear-opener. I heard Dausgaard most recently to great effect in brazenly colourful works (with the BBC Symphony Orchestra in February), and he was every bit as impressive in more sombre repertoire. 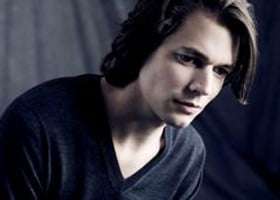 The performance of Beethoven’s C minor Piano Concerto was tantalisingly on the edge of being exceptional. Dausgaard established an intense, almost Brahmsian melancholy in the orchestral opening that cast a long shadow over the whole of the first movement, and which threw down the gauntlet to the soloist to transcend it. He was the French pianist David Fray. It’s easy to be wrong-footed by this young artist’s studiedly introverted stage manner – slouched back in his chair (like Gould and Lupu) when he’s not playing he seems every inch the romantic performer – but his playing had a steely rigour that contrasted, sometimes too starkly, with Dausgaard’s more rounded approach yet often without suggesting a significant other dimension to the music. He kept you longing for a bit more variation of tone or for some more engaged phrasing, but then he powerfully delivered in a stunningly majestic cadenza, from which he retreated in playing that, in its subtlety and refinement, suddenly meshed with Dausgaard’s overtly romantic approach. In the slow movement, Fray found a luminous rapport with flute and bassoon in their brief but eloquent trio, but there’s a good deal more humour in the finale than allowed for in Fray’s ration book. It was very frustrating, taking with one hand and giving with the other, but when his guard was down, the results were special.

Dausgaard and the Philharmonia played the final version of Bruckner’s much tinkered-with Third Symphony, which imposes wisdom and expediency onto the composer’s vivid, sometimes-awkward earlier thoughts, akin to putting a startling, unruly painting in a conventional, ornate frame. Yet, from the hermetically sealed D minor of the introductory pages onwards, Dausgaard’s powerfully engaged conducting negotiated the unexpected structural and harmonic turns without losing any of the clarity and boldness of Bruckner’s concept.

The opening can sound harmonically stuck, but the pressure Dausgaard built up fuelled the rest of the first movement’s extraordinary, vital mobility – even Bruckner’s characteristic throat-clearing passages underpinning big structural moments had a special dynamism and integrity. Dausgaard’s sense of scale was also well-judged, in that he didn’t impose unnecessary expectations on the slow movement – which doesn’t have the scope of the adagios in the later symphonies – and found the perfect balance between pace and climax, with a notably graceful melting into the triple-time middle section. The trio of the scherzo burst with barn-dance openness, and the contrast of the whirling centrifuge that opens the finale and the strong polka element built into a thrilling coherence, so that the reappearance of the theme from the first movement sounded integral rather than clipped on. Dausgaard clearly knows the difference between speed and long-term pace in this music, which gave breadth and nobility to some notably agile and pliable tempos. The Philharmonia Orchestra’s playing combined athleticism and weight with Viennese colour, so that Bruckner’s orchestration registered a satisfying transparency as well as its customary force.